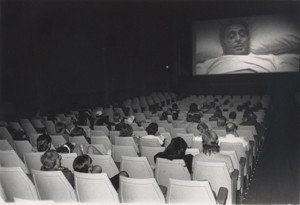 Built in 1916 to house a furniture store, it was gutted by a fire on December 22, 1951. The Aggie Theatre on S. College Avenue was rebuilt within the four existing walls to the plans of local architect Perry Knight and opened on April 14, 1953 with Robert Taylor in “Ivanhoe”. It was closed by Commonwealth Theatres on March 20, 1987. It was reopened on September 21, 1990 and closed in late-December 1995 with Wesley Snipes in “"Money Train”. It now operates as a concert hall which has a capacity of 650-standees.

I was living in Fort Collins In The 1990s and kept the article about the Aggie theater closing.Here is the brief about the Aggie Theater,from The Coloradoan.Originally opened in 1916 as a furniture store by Robert H Dowdy and Frank Aydelotte-Fire gutted interior of the two story builing and basement Dec.22,1951-Reopened as the Aggie Theater April 14,1953-frist movie shown was “Ivanhoe” with Robert Taylor and Elizabeth Taylor-Remodled in 1970 with 200 seats removed to enlarge the lobby-Closed by Commonwealth Theaters on March 20,1987-Reopened Sept.21,1990, after Rawlins, Wyo., investors group purchases the builing for $100,000-Remodeled in July 1993 to add new “rocking” chairs-Cloesd late December 1995-Last movie shown was “Money Train” starring Wesley Snipes nad Woody Harrelson.

I saw Max Creek here in April of 2001 (myself and other fans flew out from Connecticut to support them). Nice interior as I remember. I believe there was a wraparound balcony with tables and chairs. They also played the Gothic and the Fox in Boulder.

Full size version of the 1956 photo added, courtesy of the AmeriCar The Beautiful facebook page.

The July 11, 1960 issue of Boxoffive had a short article about former assistant mayor Frank Aydelotte, who “operated the Aggie Theatre in this college town north of Denver. He built the theatre in 1953 because the Trail, which he had been operating, was too small for his growing business.”

The same article later noted, “In 1947 he came to Fort Collins and took over the Trail, but closed it when he opened the Aggie in 1954 and the Trail was remodeled for business use.” If both quotes are accurate, the Aggie was built in 1953 and opened in 1954. But the Aggie Theatre web site still says it was opened in 1906.

Grand opening ads started on this page from April 12th, 1953. 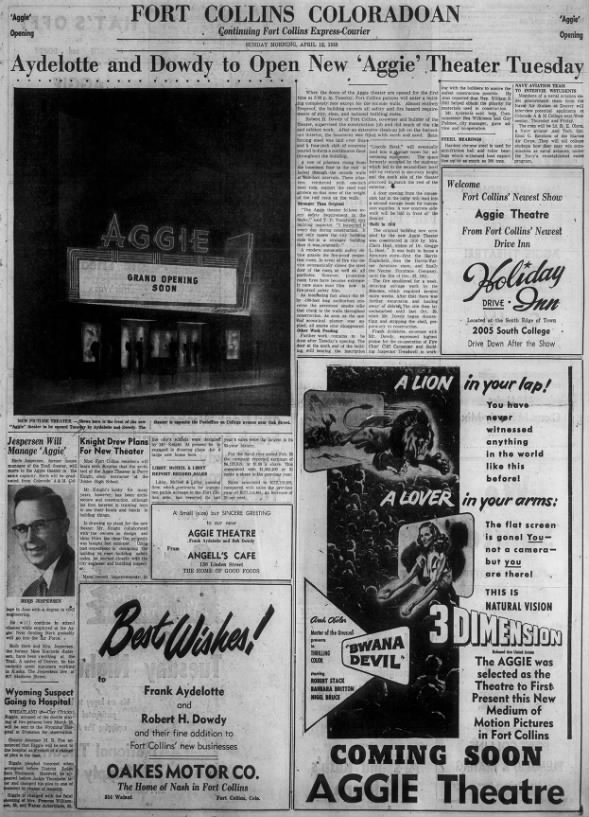 1967 postcard added courtesy Shelby the DJ at 99.9 The Point in Fort Collins.

Boxoffice, Sept. 27, 1965: “Frank Aydelotte, an exhibitor for 35 years, has sold his local Aggie Theatre to Carlin Smith of Wesco Theatres, a Cheyenne-based circuit … Transfer of title to the Aggie became effective September 10.”