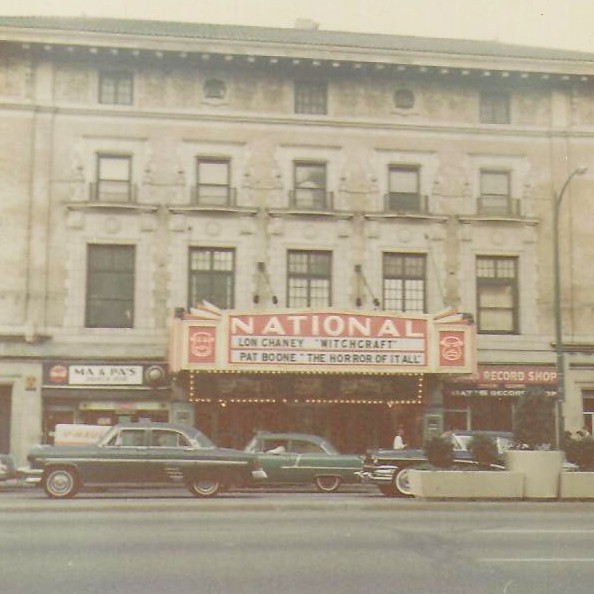 A group of local businessmen purchased the Rex Theater of 1909 vintage. They demolished it in 1922 and started construction in the same block as the grand Colonial Theatre on Broad Street.

Some felt the new National Theatre was the finest theater in Richmond. Part of that credit would go to Ferruccio Legnaioli, a fabulous Italian artisan in marble, cement, bronze and plaster. His work found its way into many theaters and public buildings. The beauty of the building really blew away the opening night crowd of 2,000 crammed into the theater. “Her Reputation” entertained the governor and other dignitaries on November 11, 1923.

The heyday for the National Theatre had to be the 1940’s. During the first three decades of the history of this house, vaudeville, bands, and other types of performers shared the stage with films. The Hal Sands Dancers were the headlining act for years. The WWII years were hectic, as at most other sites. The theater changed hands several times during the next three decades.

As business dwindled, a “refreshing” occured around 1966. This involved a new marquee, painting over murals and plasterwork and changing the name to the Towne Theatre. It struggled along until 1983, being the last of the great downtown houses to close. A sad day, for sure.

The theater was saved from the wrecking ball in 1989 by the Historic Richmond foundation. They, and other volunteers, have worked to keep up the building. Much of the great features were repaired and uncovered. Tours have occasionally been laid on and there was hope a real use could be found for this great theater.

Reopening as a concert venue on February 21, 2008 with a 1,500-person capacity (including 300 seats on the balcony and standing only on the orchestra level) and seven bars, after an estimated $15 million renovation.

Listed on the National Register of Historic Places in 2003.

is there an Internet link to today’s newspaper article?

PRECISELY,oh wise,all knowing one.How do you get the powers behind this great site to edit the headings?

Changes will be up soon, likely today or tomorrow.

WELL,A group of friends went this past eve.to see the NEVILLE BROTHERS in concert.Of,course the theater was the thing for me-although the concert was fabulous.
I have to say that,while a work in progress,the place is a thing of extreme beauty.The workmanship is awesome to behold.It is obvious that today’s custodians are aware of their stewardship.Gibsons resteraunt is not open yet,but when open,will enhance the evening,for sure.If they could get the sound system a bit better tuned in,that would add a LOT to the experience.
All in all,a great new asset to the area.A blast to all the senses.I really appreciate the effort.My only suggestion would be to add seats at the rear of the downstars.

Nice building with good acoustics. Uncomfortable wooden seats. Better call this place a night club though. People walking around talking, eating and drinking. Not a place for a partially handicapped person. I’ll say no to going back.

1978 clipping of newspaper ads for Towne and other Richmond-area Neighborhood Theatres:

Saw many movies here during its run as the Towne, including FUNNY GIRL, which played with reserved seats. Other movies there included TAKE THE MONEY AND RUN, LADY SINGS THE BLUES, THE REIVERS, LITTLE BIG MAN, and THEY SHOOT HORSES, DON’T THEY. Recently saw Sharon Jones and the Dap Kings in concert there. It is a cool venue for music and lots of fun.

On Wednesday 21 March 1951, Bela “Dracula” Lugosi presented his Horror and Magic Stage show for one night only at the National Theater. Currently I am conducting research on all things Lugosi; if anyone out there actually saw this show and/or has memorabilia (poster, handbill, photos) related to this show, please contact Bill at I already have copies of the ads that were published in the Times-Dispatch. Thanks in advance for any assistance!