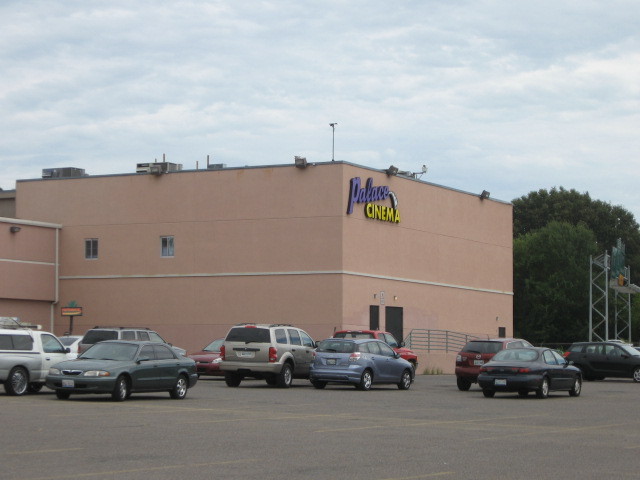 Opened on May 26, 1971 by the Cobb circuit, the Fare 4 Theatre was named to link it to the Food Fare located in the same parking lot. It was with a food court across the parking lot since it had no mall. It was later expended from four to ten screens. The Fare Theatre was later acquired by Ajay Theatres who expanded it to 8-screens on September 18, 1992 when it was renamed Cinema Showcase. In 1994 it was expanded to 12-screens. On October 22, 1999 it was renamed Star Cinema 12, which closed in 2002. On June 27, 2003 it reopened as the Palace Cinema with 10-screens.

Spent many many happy evenings at the Fare Four and later the Fare Eight. It was built as a four plex as part of a larger entertainment and dining complex. There was a sort of food-court-sans-mall next door called “The World’s Fare” which didn’t fare well at went out of business fairly quick. The Fare Four showed art-house films in the 1980s and 1990s. The auditoriums kept getting smaller as they were cut down to make more screens. It was something of a mess when I last saw the hall in 1992. The original decor was completely forgettable.

It has 12 screens, all with stadium seating. I remember going there when I was a sophomore in college (1978, I think) to see Sylvester Stallone in a pre-Rocky film called “The Italian Stallion.” It was re-released after Rocky became such a big hit. As I recall, it seemed like a soft-porn film to me, and I was horrified. My date, now my husband, told me he was shocked, too! Right….

I went to the Fare Four on an almost weekly basis in ‘81-'82 mainly to see the girls who worked in the ticket office (Ruth Ann and her friend) than to see the movies, but I very much appreciated its ¼th devotion to art films. I remember seeing Camille Claudel there.

New Photo: Architects rendering of the proposed Fare Four Cinema which has become, after several alterations, the Palace Cinema.

I visited this theater once in late November 1999. I can only hope that the current operators (Covid19 pandemic) aside, have greatly improved this old movie house. At that time, it was a second-run aka discount theater. I took my sister to see a discounted running of The Sixth Sense, shortly before its release on home video. I just remember how dilapidated, uninspiring and dirty the building was. It seems from the photos, the owners have at least tried to remedy the dated décor with a a castle themed façade. I recall only a simple ticket window leading into a cramped 1970’s era concessions lobby. Has anyone visited this theater in recent times and is a first-run theater?