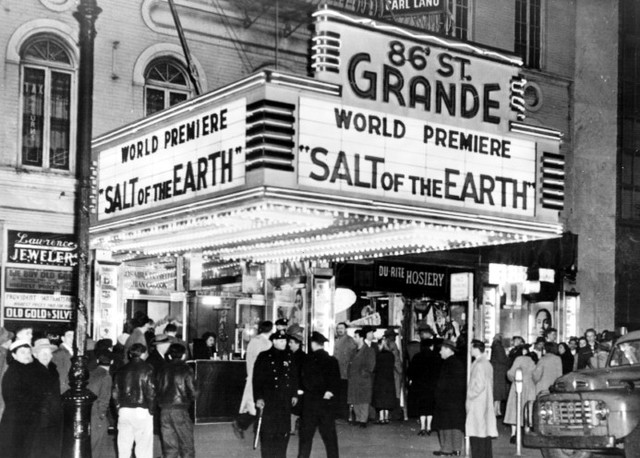 History is difficult to find about this theatre, but its original name seems to have been the 86th Street Winter Garden, and it might have started out as part of an entertainment complex that also included a restaurant, ballroom, etcetera.

By 1936, the name had changed to 86th Street Garden Theatre. In September of that year, it became a showcase for German imports, starting with UFA’s “Schlussakkord”, a musical starring Willy Birgel, Lil Dagover and Maria Tasnady. German films continued into the 1950’s, and were even shown during WWII (revivals approved by the U.S. government).

After that, the theatre switched to subsequent-run Hollywood movies under the name of 86th Street Grande (the letters of “Garden” re-arranged) into the 1960’s, until demolition for new buildings.

granddaughter-my great grandfather ran the schwarzer adler. Would love to know how we are related

Always fascinating insights into street life of over a century ago. Neon signage played a major roll in illuminating the urban streets-capes whether through bright retail signs or movie marquees. Promoting a particular brand, and developing immediate recognition was achieved through lighting. It seems that East 86th St. was never dark. Can’t imagine the sight from any of the elevated subway lines as you pulled into the station.

Neon signage is a vanishing art form, I hope eventually they will be a new renewed interest in it before it'a too late. Most vintage movie theatre marquee’s were spectacular in using it to draw patrons from the sidewalk in.

Along Brooklyn’s Gowanus Canal there is a workshop that gives lessons in glassblowing and creating neon signs. I hear that the signage involves quite an intricate process. Could we possibly hope for a neon sign comeback?

Neon is expensive and noisy, breaks too easily, and takes time to replace. All we can expect is LED simulations.

The vertical on the E-Walk was a great example of an LED simulation that was supposed to resemble the old neon style of days gone by.

The neon signage was the accent for the marquee but there were loads of incandescent bulbs. The Grande marque is small compared to, for instance, the one on RKO 58th where I worked in the late forties and fifties. The underside was a blaze of light. They also used the chasing flashing lights to frame areas and edges. I used to help the house electrician in changing the signs on the marquees when the movie changed (we had two). Behind the lettering were literally hundreds of incandescent bulbs. Relamping was a several hour job. You would try to unscrew a lamp and the glass bulb would separate from the metal base and the fine wires would short with sparks. The he heat coming off all those lamps were incredible. Those signs had to be changed despite any weather, rain or snow or wind. Fifteen years old and helped erect the scaffolding and then move it around to each side of the marquee, climb up there and slide the metal plates with the letter cot-out in and out The sign layout was approved by the manager, RKO had black metal panels with the letter cut-out and a white porcelain letter fastened in it. There were blank panels, full size, quarter and half sized for spacing. The signs had to arranged so everything was balanced. The Grande marquee though small is quite well done.

Thanks for the detailed description TonyV, I really liked the RKO Zig-Zag style with all of the chaser bulbs in yellow & white. The Kenmore Theatre in Brooklyn used those type of letters you described on it’s marquee until it closed in 1999, wonder if it was the last one in the city to still have that style.

There are barely any theatre marquees to speak of. Whatever signage exists is bland and nondescript. There are recognizable logos such as AMC, but would any of these identifiers lure me into that particular movie house? Theatrefan made a valuable suggestion of the applications of LED as a replacement for neon. That could be quite exciting.

When AMC took over the Century chain on Long Island all the unique signage, particularly on the Meadows in Fresh Meadows, just became the red AMC which is very similar to the AMF bowling alleys. The names of the theaters are not even displayed anymore.