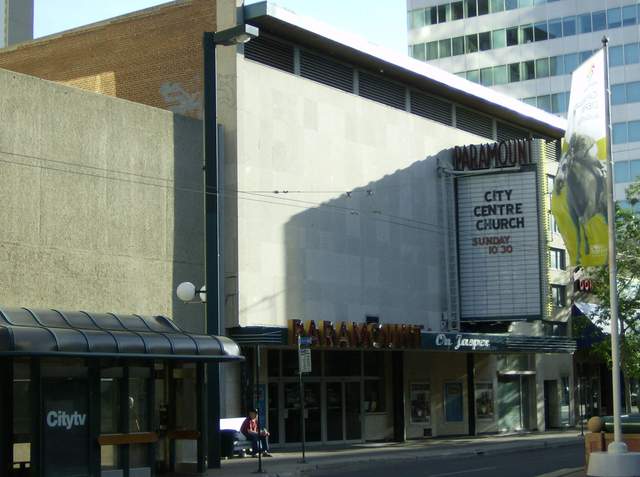 Edmonton architectural firm Stanley & Stanley designed the Paramount Theatre in the rather austere International Modern style of the early-1950’s. It featured a stone facade, an angled canopy across the width of the building, and a vertical marquee. The Paramount Theatre opened on July 4th, 1952 with Dean Martin & Jerry Lewis in “Jumping Jacks”. With its original 1,500 seats, it was Edmonton’s largest cinema, but the seating was greatly reduced in a renovation on June 21, 1985.

Despite declining attendance, the Paramount Theatre remained open until closure on June 26, 2003 with “Rugrats Go Wild!”. After its closing, there were plans to make the Paramount Theatre a venue for live performances as well as special event movies, but more recent plans envisioned its conversion to an IMAX theatre. It became a church in July 2006.

This photo was on a German site about Edmonton:
http://tinyurl.com/ywbjjh

The 1952-1953 edition of Theatre Catalog, has a three page review of the Paramount Edmonton, which states the architects are Green, Blankstein, Russell & Associates, who also designed the Paramount Theatre, Lethbridge, Alberta.

Ken: My source for the attribution of the Paramount to Stanley & Stanley was this article by Edmonton writer and photographer Lawrence Herzog. His articles (archived here) were the source of most of the information for the various Edmonton theaters I added to the database.

Most likely both firms played a role in the design of the Paramount, but I have no idea exactly what role each took. Stanly & Stanley might have been only the local associate architects, advising the Winnipeg firm on local building codes and overseeing construction (Edmonton and Winnipeg are about 800 miles apart.) Or, Stanley & Stanley might have taken a more active role in the overall design of the building, and Green, Blankstein, Russell & Associates could have been responsible for no more than the theater layout and its details, if they were experienced in what Famous Players wanted in its theaters.

I’ve searched the Internet to see if I could find anything about an ongoing relationship between Famous Players and Green et al., but found nothing.

Does anyone remember the opening feature? I’m pretty sure it was ‘Singin’ in the Rain' and I spent most of that summer going to see it. 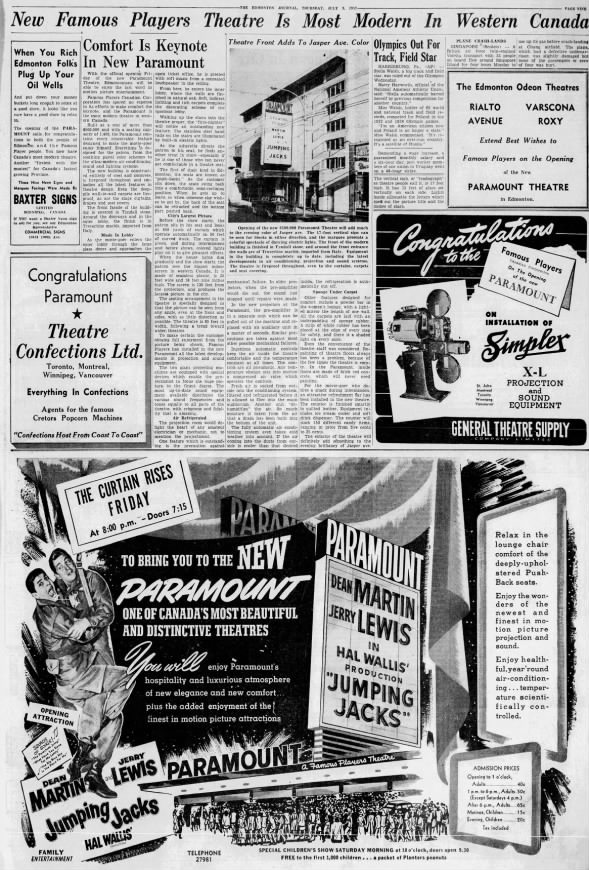 Hume Cronyn, Wilford Brimley, Maureen Stapleton and Jessica Tandy in Ron Howard’s “Cocoon” opens in 70 MM Six-Track Dolby Stereo on June 21, 1985 at the newly-renovated Paramount Theatre in Edmonton. To make room for all the added comforts, every second row of seats were removed, reducing the seat count from more than 1,100 to 800. (Images added)

“Dean Martin and Jerry Lewis in Norman Taurog’s "Jumping Jacks” opens July 5, 1952 at the new Famous Players Theatres Paramount Theatre, located at 10233 Jasper Avenue in Edmonton. The Paramount has the largest indoor screen in Western Canada. Made of seamless plastic, it is 25 feet wide and eighteen feet nine inches high. With 1,400 seats, the theatre is designed so the picture can be seen from any angle. The first manager is Walter Percival Wilson. On May 27, 1985 the Paramount closes for remodelling and the seat count is reduced to 800. Opens on June 21, 1985 with “Cocoon”. Theatre closes on April 26, 1987 for the Installation of THX Sound System. Opens on May 8, 1987 with “Hot Pursuit”. Paramount closes on June 26, 2003 with “Rugrats Go Wild!”