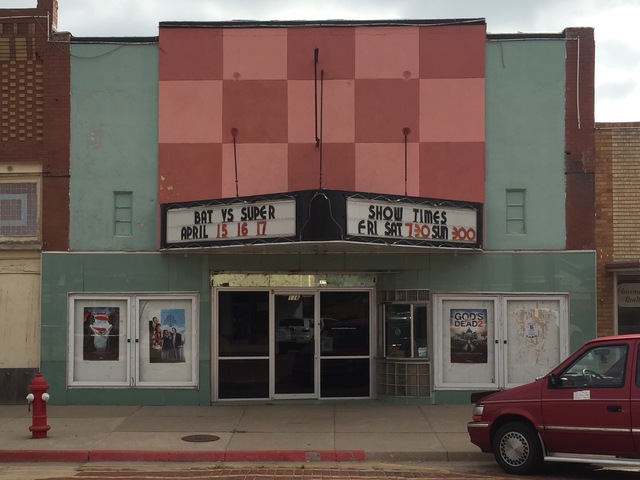 The Art Moderne style Ritz Theatre on Main Street in Stafford is shown in the 1945 Film Daily Yearbook as open with seating for 400.

Since the early-1990’s, the theatre has been undergoing various restoration projects, including new projectors, heating and air-conditioning, and a roll-up screen to allow for live entertainment on stage. The Ritz Theatre presents first-run movies on the first and fourth weekends of the month as well as Sunday matinees.

Any further information on the Ritz Theatre would be appreciated.

Here are excerpts from an article in the Great Bend Daily Tribune dated 6/26/56:

Americans have had occasion to witness many radical changes in the field of entertainment, They saw vaudeville turn like a butterfly into radio, motion pictures, then talkies and most recently television. But now it’s possible to study something that may be on its way out. And if it did fade completely but of the picture, it would soon be classed as a very important part of American folkloreâ€"the home-town movie.

In the many communities visited for this survey, all showed strong signs of civic pride. In all, the citizens would say that they didn’t want to lose the theater, but weren’t sure exactly what to do to prevent it. Attend the theater at least to see what it has to offer and possibly avert the situation which seems to be threatening most one-theater towns. At St. John and Stafford the situation has become even more critical. Recently, a Tribune reporter visited John Caylor, manager of the Pix theater and Mr. and Mrs. Frank Gere, who managed the Ritz at Stafford. Business was not good in either theater and there was talk of closing one.

Businessmen around town, queried about the possibility of the shows' closing, said they preferred to keep the established entertainment centers but frankly didn’t know how to go about saving them. A former manager of the Ritz theater said he sent back any films he considered unfit for children and told the bosses (Glen Dickinson of Mission) that 60 cents was too much for a show. Others around town said they favored keeping the show but readily admitted that “we don’t know what to do to keep it going.” There was some criticism about the choice of films although most people interviewed said that in the past year he quality of the films had increased considerably.

Both theaters are air-conditioned, both have installed the new wide screens and new lenses, new, soft seating, wide leg room between rows and both have attractive snack bars in the lobbies. The Ritz seats 472 and the Pix 260. The Geres came to Stafford 1 ½ years ago. They’ve done everything they know to keep patronage up to make the business a paying proposition. Since the interviews the St. John theater had closed and Caylor is now operating the Ritz. He said there was not as much business at the Stafford theater now that St. John residents have no movie as there was when both theaters operated. He thinks the St. John theater will be reopened and the Ritz may be closed. Meanwhile, Mr. and Mrs. Gere have left the theater business and are in Wichita where Mr. Gere is working for an oil firm.

The Ritz was a rebuilding of an older house called the Nueva Theatre, which had been severely damaged by a fire on March 15, 1937, according to Boxoffice of April 24 that year. Boxoffice of June 19 said that the opening of the Ritz was scheduled for June 23.

The architect for the rebuilding was Trevor C. Jones. Jones worked on at least three other theater projects. He designed the Co-Ed Theatre at Topeka, Kansas, the State Theatre at Mound City, Missouri, (with Clarence Kivett), and he was associated with Robert Boller in the design of C.E. Cook’s Tivoli Theatre at Maryville, Missouri, in 1939.

Recent pictures of the Ritz posted in the Photos section.