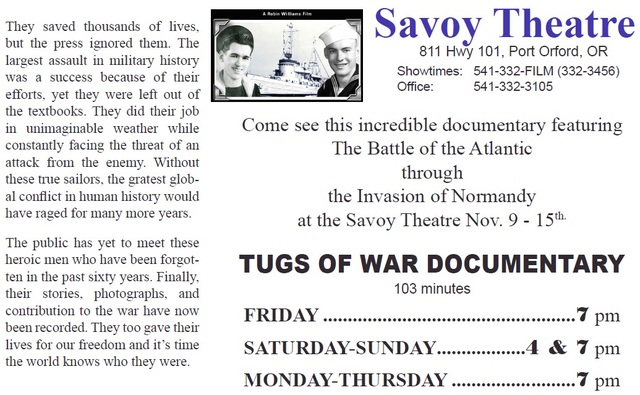 The Colonial Theatre was opened prior to 1941, when it that years' edition of Film Daily Yearbook it was listed as (Closed). It had reopened by 1942, but had gone from listings in 1950.

Later reopened as the Star Theatre, today, known as the Savoy Theatre, it is a single screen movie theater that is also used occasionally for concerts.

The Savoy Theater is open seven days a week with matinees on Saturday and Sunday; this in a town of 1,200 people. It has been wonderfully restored by the owner and is the pride of Port Orford. The theater was previously known as The Star during the 1980’s and early 90’s. Before that it was called The Colonial.

The Savoy Theater has 13 interesting flavors of salt to put on your popcorn; more than any other theater I have been in. In fact how many other theaters have a “salt bar” for your fresh popped popcorn?

I saw and photographed the exterior of the Savoy last week. By chance, the woman who owns and operates it came out and spoke with me. She told me that it was built in the Thirties, and indeed was originally called the Colonial. She named the theatre Savoy after a favorite dog of hers, whom she’d named after the Savoy Brown band(!), with full knowledge that there are plenty of old theatres the world over with the name Savoy. A friend of hers from Canada painted the mural which is on the exterior wall facing you as you drive Northward on 101. The wall holding the mural is not actually a wall of the theatre, but the sole surviving wall of a grocery store which once stood next to the theatre. The owner of the grocery had long ago feared that the theatre would burn someday due to the projector, and so erected the concrete wall to protect his store. Ironically, it was the grocery store which eventually burned down. There was a restaurant and gas station on the other side of the theatre. These are now replaced by a modern building. The previous owner of the theatre also operated theatres in Weed, and the California Theatre in Dunsmuir. The present owner of the Savoy had her eyes longingly on the Dunsmuir Cal, but it was too large a project for her to get involved in.

Website’s domain is for sale. Any online proof that it is open?

The Savoy Theater is not showing movies currently but has hosted some special events recently. The theater marquee lists the theater for sale, lease or rent and has a lot going for it. It is in very good condition and located in the heart of Port Orford.

Was operated as the Star Theater by Nick Reynolds after he left the Kingston Trio.