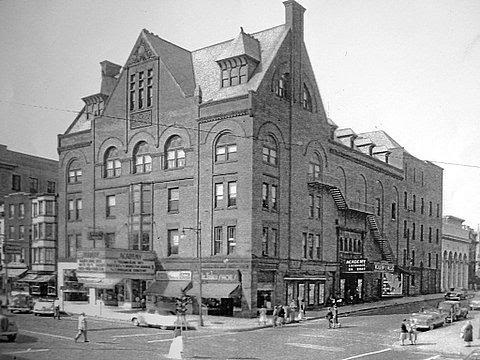 This was originally a concert hall and playhouse known as the Academy of Music, which opened in September 1888. After conversion to a cinema, the name was shortened to Academy Theatre. In January 1926 it suffered damage from a fire and was closed while repaires were being carried out. At that time it was operated by Famous Players.

Situated on the opposite side of Broadway from the Ritz Theatre, Cameo Theatre, and Broadway Theatre, the Academy Theatre catered to Newburgh’s large black community and was listed in Film Daily Year Books as a “Negro Theater”. It played the same movies as the other Newburgh theatres, but considerably later. By 1950 it was operated by Liggett-Florin Booking Service.

The Academy Theatre was destroyed in a fire on February 15, 1956, and its remains were demolished.

Ray – Actually, before the late 1950’s, there were two small concentrations of “Blacks” living in Newburgh. On the North Side, along both sides of Smith Street from First to South Streets, and on the South side, an even smaller concentration living on Ann and maybe Washington Streets, just West of Liberty Street, near a church with a Black congregation.
In Newburgh, I lived in the Colonial Terraces in the Northwest Quadrant, and was at West Street School from 1939 until 1946. During all the time I was there, there was not ONE Black student there. Not until I got to NJHS were there any Black kids enrolled.
One of the leading families in Newburgh as far back as the turn of the 20th Century (before even MY time) were the Alsdorfs, who operated a dance academy down on Liberty Street for many years.

Bob…Well, we basically agree that the black population was very small in Newburgh during the 40s and early 50s. I agree with you that during my elementary school days, there were no black students until I entered SJH in 1955 and NFA from ‘56 to '59. I never heard, however, the Academy being referred to as a “Negro Theater.” My brother and I and the local neighborhood gang of kids almost always attended the Saturday afternoon matinees at the Academy in the late 40s and early 50s and never recall seeing any black kids in attendance. The Alsdorfs were probably gone during this time as the name is not familiar.

Ray…up until late 1949, when my Dad was transferred to Delaware by the Fabby, I also was a fairly regular attendee at those interminable but enjoyable Saturday Matinees at the Academy, but I DO remember seeing a FEW black kids in attendance. But it was then in no way, shape or form, a “Negro Theater” then, either. It was just a theater. I failed to mention earlier that the Alsdorf’s were a ‘black’ family that had been in Orange County since the early 1700’s, and that the last surviving member of the family that I remember seeing was a very old man, and was a still a respected member of the Newburgh business community.

Bob…We do agree on the issue of the Academy being just a theater regardless if there were in attendance black kids or not. I do remember that era in Newburgh’s history as being a predominantly a non black one as far as the population is concerned. As I stated earlier, when one did see a black person, it was very uncommon thing. Not until the mid 50s when the first migrant workers arrived from the south to pick fruit in the area north of Newburgh did the black population begin to increase. Incidently, being a Wilson, do you still have relatives in the Newburgh area? I married a Wilson—just wondering if there is a connection? My email is

The Academy of Music in Newburgh is listed in the 1897-98 edition of the Julius Cahn Official Theatrical Guide. Fred Taylor was the Mgr. and the seating was 1,248. Ticket prices ranged from 25 cents to $1. The house had both gas and electric illumination. The proscenium opening was 40 feet square, and the stage was 30 feet deep. The theatre was on the ground floor and there were 6 in the house orchestra. There were 3 daily newspapers and one weekly and there were 5 hotels in town. The 1897 population of Newburgh was 28,000.

I just noticed that the Academy is listed here as being “closed”. More properly, it should be listed as “demolished”, since I know for a fact that as far back as 2001 and probably well before that, its site has been was a parking lot on the NW corner of Grand Street at Broadway.

Construction of the Academy of Music began in 1887. A history of Newburgh’s Masonic Lodge published in 1896 says that in late 1887, while the Academy was under construction, the Masons leased the rooms on the third and fourth floors of the building, and the rooms were complete and ready for a dedication ceremony which was held on September 11, 1888. The theater must have been opened around the same time.

The Academy was probably the first the first theater in Newburgh to open with electric lights, which had been first introduced at the Savoy Theatre in London in 1881. The November 3, 1888, issue of The Electrical World had this item:

“Newburgh, N. Y.—The Edison Electric Illuminating Company, of Newburgh, N. Y., has just finished a number of important changes in the arrangement of their electric apparatus, and have laid another feeder from their station to supply the new Academy of Music with incandescents, and open up a new territory to the Edison light. The Newburgh Company is one of the oldest of the Edison organizations.”

An advertisement in the New York Dramatic Mirror was placed prior to opening by local manager A. S. Wood and New York booking agents Klaw & Erlinger describing the Academy. The ground floor house had 1,252 seats, six boxes, a stage 80 feet wide and 30 feet deep, and boasted “[e]very improvement in heating and electric light” as well as “15 sets of first-class scenery” among its equipment.

I haven’t been able to discover for certain who designed the Academy of Music, but there is a tantalizing reference in a booklet published for the New York Terra Cotta Company in 1891. Terra Cotta in Architecture, by Walter Geer, lists a number of buildings in which the company’s products had been used, and one of the two buildings listed at Newburgh is a Grand Opera House. I’ve found no other references to a Grand Opera House ever having existed in Newburgh, and I think it very likely that the building in question was actually the Academy of Music, misnamed. In 1891, it was the only large theater that had yet been built at Newburgh.

The booklet lists the Albany firm Fuller & Wheeler as the architects. Diana S. Waite’s Architects in Albany includes a brief biography of Albert W. Fuller, by T. Robins Brown, (Google Books preview, page 34) which includes a list of their buildings, but only those in Albany, and it has a drawing of their 1889 Albany YMCA, which was designed in the same Romanesque Revival style as the Academy of Music. The firm designed projects outside Albany, including YMCA buildings as far away as Montreal, Quebec, and Oakland, California, and they assisted in the design of a YMCA in Paris, France, so a project in Newburgh would not have been surprising.

So, while I’ve found no specific attribution of the Academy of Music to any architect, I do think it very likely that it was designed by Albert W. Fuller and William Arthur Wheeler.

It’s also of interest that, when the Newburgh Masonic lodge moved out of the Academy building in 1914, Albert Fuller (by then a partner in the firm of Fuller & Robinson) was the architect they chose to design their new building. I think that does indicate some familiarity with his work among citizens of Newburgh.

I grew up a few blocks away from the theater at the beginning of Grand Street and went to Grand Street elementary school a few blocks up Grand Street in the other direction. Was a great place during the mid-1950’s to sit through cartoons, a cowboy serial and a triple feature for 10 cents. I was there and watched the building burn. I was across Grand St. from the building where the Evening News newspaper was located and watched the reporters run in and out of their building. There was also was a big glass window at street level in the newspaper building where I watched the presses rolling with the story.

Does anyone have any additional pictures or footprint plans of the Academy of Music or information about where it stood relative to buildings next to it on Broadway, particularly toward the rear?

JeffRW: Comparing the three vintage photos on our photo page with modern Google street view, its clear that the bay windowed building next door to the theater on Broadway and the building with the arches on Grand Street which was adjacent to the theater’s stage house are still standing. I don’t see any alleys separating the theater from either of those buildings, so it must have taken up the entire space of the parking lot.

Unfortunately, the oldest aerial photos of Newburgh at the web site Historic Aerials date from 1965, long after the theater was demolished. They might get an older one showing the theater eventually, and then we’ll be able to see for sure how it fit onto its lot. I know of no other online sources that currently have older aerials of Newburgh.

The Academy of Music suffered a serious fire sometime around the beginning of 1926. Repairs were underway, according to this item in the January 23 issue of The Moving Picture World:

“The work of repairing the damage done by fire to the Academy of Music in Newburgh is progressing rapidly and it looks as though the house would reopen within a few weeks. The theatre is one of several acquired by the Famous Players, which also has the Bardavon and the Stratford in Poughkeepsie, as well as the second-run Liberty. There is a stiff fight on in Poughkeepsie for patronage between the Famous Players group and another group of three houses run by George Cohen.”This web page has a few photos of the Academy (click arrow next to visible thumbnails) including a couple showing the aftermath of the 1956 fire that led to the theater’s demolition.