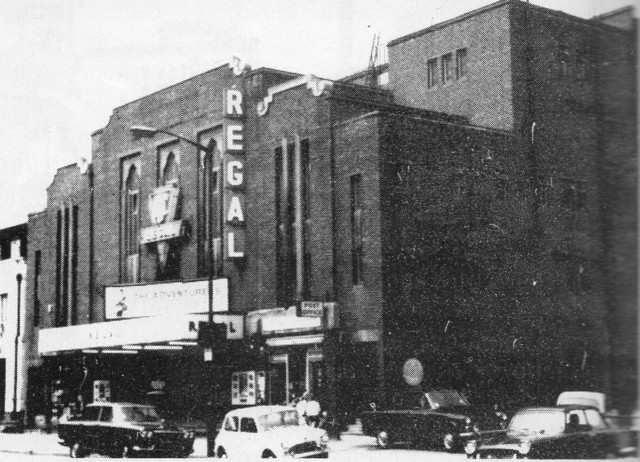 Built and operated as an Independent cinema, the Regal Cinema opened on 26th February 1934 with Ivor Novello in “I Lived With You” and Slim Summerville in “Her First Mate”.

The imposing brick building was set back slightly from the main Brighton Road and included in the entertainment development was an adjacent Imperial Ice Rink (later to become the Orchid Ballroom, then Cinderellas Rockerfellers nightclub). Seating in the auditorium of the Regal Cinema was provided for 1,106 in stalls and 472 in the circle. There was a café located off the circle foyer which had its own separate street entrance (In later years this area was used as a dance studio). The decoration in the auditorium was a pleasing Art Deco style that had ribs in the ceiling that splayed out like bursts of sunrays from the top of the proscenium arch and a recessed panel in each side-wall that had a decorative tree design inscribed on their surfaces.

Within months of opening, the Regal Cinema was taken over by the Associated British Cinemas chain(ABC) from 11th June 1934. The ABC lozenge triangle sign was put on the front of the building, but it always remained the ABC Regal Cinema and never suffered the indignity of loosing its identity like others in the chain and becoming plain ABC Purley.

By 1974 the ABC chain had been taken over by the EMI Group and as they had now two cinemas in Purley (the other was the former Astoria Cinema), it was decided to close one of them down and triplex the other. The Regal Cinema became the casualty and closed on 16th February 1974 with Donald Sutherland in “Don’t Look Now” and Christopher Lee in “The Wicker Man”. The building was taken over by the Star Group and was converted into a Bingo Hall.

Later operated by an Independent bingo club operator it was closed on 31st August 1996 and demolished in January 1998. A building containing Screwfix home improvements now occupies the site.

I worked at Shipman & King’s Astoria 69-70. The two cinemas were part of the EMI Group. We used to share the Pathe News. The Astoria screened the news at the start of the programme and was taken to the Regal for a mid programme screening. We were offered bus fare money for the mile each way but kept the small change and walked. I used to enjoy the late night films at the Regal, afterwards a drink at the Mecca Ballroom next door.