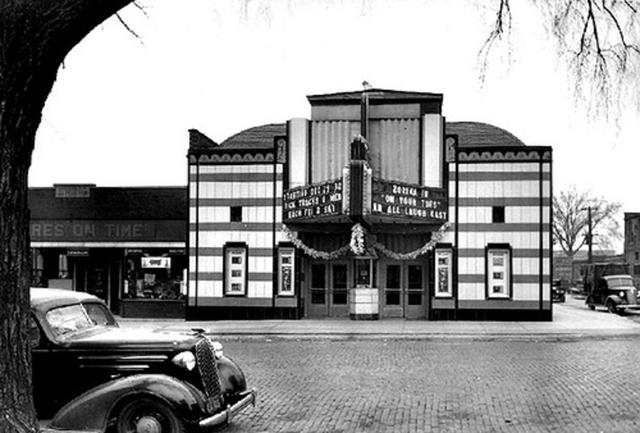 Here’s a flickr page with some photos of the Lamoine/Lark Theater:

Technically, it should be the Lark Theatre. It did open as the Lamoine Theatre in 1935 but was taken over by the Illinois and Royal Theatres. The operator purchased the Lamoine to replace the undersized Royal Theatre roughly two blocks away on the Macomb Square which is closed in 1936.

In 1954, a naming contest is held and changes to the Lark Theatre. It remains the Lark for 33 years until closure in July of 1987. For Hollywood’s Golden Age and downturn from 1936 to 1970, the Lark and Illinois were the town’s stalwart and only indoor theaters. Big hits in the latter stages included “E.T.” and “Raiders of the Lost Ark.” With competition from the Cinema 1 & 2 and home video, the Lark flirted with running as a discount house to stay competitive. It closed on July 16, 1987 with “Beverly Hills Cop 2”.