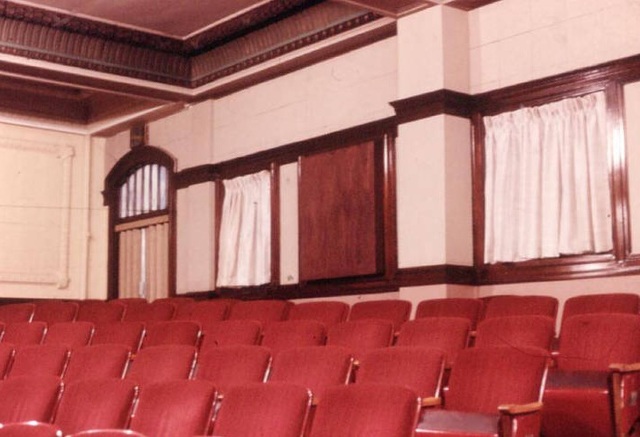 Designed by John Eberson, the Hippodrome Theater opened in 1915. This theater started out as a vaudeville theater, switched to motion pictures later in 1915 when the first film screened was Edmund Breese in “The Walls of Jericho”. In 1948 it was remodeled and reopened September 11, 1948 as the Wabash Theater. It later became a community theater and finally returned to motion pictures. Around 1956 the Wabash Theater closed.

A year later it was acquired by the Scottish Rite. It is used as their cathedral and museum. Tours of the building are given by appointment.

The Hippodrome was remodeled and renamed the Wabash in 1948, according to an item in Boxoffice, October 2 that year, which said the house had recently opened. Currently, the theater’s official web site gives 1949 as the year the Wabash opened.

The July 24, 1948, issue of Boxoffice had said that the remodeling was to cost about $250,000. The renovated house was to be operated as a first-run theater by Fourth Avenue Amusement Company, a Louisville-based circuit then operating several theaters in Kentucky and Indiana. The item also said that the Hippodrome had been dark for years.

Link to a photo and history site: http://terrehautehousenet.homestead.com/hippodrome.html

Opened with “The walls of Jericho”.