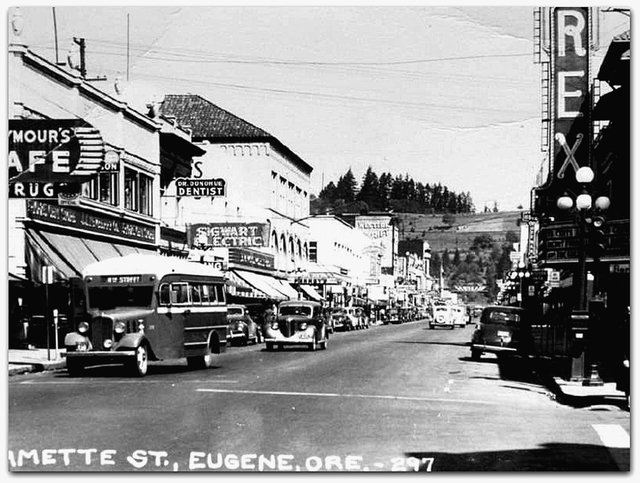 Opened in 1912 as the Rex Theatre, this 850-seat theatre on Willamette Street has also been called the Majestic Theatre, the Progressive Theatre, the National Theatre, and in its final years in operation, in the 1960’s, the Fox Theatre.

Today the building houses the Downtown Athletic Club and Conference Center. It also houses a restaurant.

There are some old photos of the theater on the Puget Sound Theatre Organ Society website at http://www.pstos.org/instruments/or/eugene/rex.htm

Opening as National on June 11th, 1971
Microfilm at View link

From the late 1930s a photo postcard view of the Rex Theatre in Eugene.

From the very early 1900s a view of the Rex Theatre..Vanishing Movie Theaters in Eugene

I remember the beautiful neon Fox sign that jutted out over the street in the 1960s and up until the Eugene sign code banned all the big signs. Seems like when the sign came down, that was about the time the name changed. I don’t think there was ever one of those generic tiny signs for The Fox. Would be really surprised if it had been renamed the Fox again as the caption says, in the end, and also the address of the theater is next door to where that athletic club is now. Fox was not on the corner it was (as another comment mentioned here) at 969 Willamette. I think that was a shoe store on the corner. And, as I mentioned, the theater did not have it’s “final days” in the 1960s. I was back briefly in Eugene in about 1985, and I think it was still open then (as The National). The last movie I saw there was in 1981.

The Rex Theatre must have been this project described in the June 8, 1912, issue of Pacific Builder & Engineer:

“Eugene, Or.: Lewis & Lewis, archts., Portland, have awarded the cont. for the const. of a 2 sto. brick theatre bldg. to O. Heckart of this city, and the brick and stucco work will be done by C.S. Frank. The bldg. is of Spanish mission design and will cost $30,000.”

Notices about the project in other issues of the journal indicate that it was located on Willamette Street, and that the theater would be operated by J.J. Bryan and Mrs. M.E. Watson. The PSTOS page for the Rex says that the house “…originally had a 2/10 Estey organ (opus #1078) installed in 1912.”

Finding the identities of the architects, Lewis & Lewis, has been rather tedious, there having also been two other architects with that surname active in Portland around this time, both of them quite active, but it turns out that the less-well-known construction-architecture firm Lewis & Lewis consisted of English-born builder William P. Lewis and his son, Robert Lewis. The firm was founded in 1898 and dissolved in 1913.