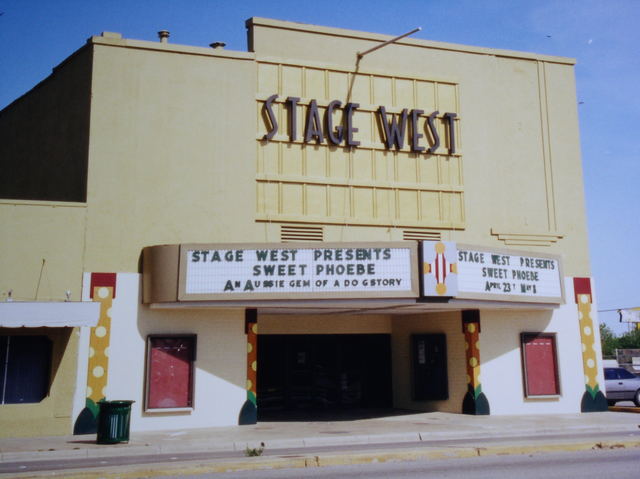 The T.C.U. Theatre was opened October 24, 1946 with Kathryn Grayson in “Two Sisters From Boston” plus a live broadcast from the stage. It was closed by Cinemark in 1979. It later became the Stage West Theatre. Stage West closed in April 2005.

Renamed the Frog Theatre in May 2005, it became a cafe, a deli, a live performance venue and screened occasional movies. The Frog Theatre was demolished in August 2006.

These people also claim that the Frog has gone to amphibian heaven:
http://tinyurl.com/ytufgw

I think so. Odd that the night club would have the same name and address.

I assure you this theatre is not only closed but gone completely… I was shocked to drive up University Drive and see a brand new drugstore standing where this majestic theatre once stood.

The August 11, 1945, issue of Boxoffice Magazine announced that permission to build the TCU Theatre had been granted by the War Production Board. Construction was to begin as soon as plans were completed and materials could be procured. Plans for the new independent house, owned by W.V. Adwell and A.J. Wylie, were being drawn by architect Jack Corgan.

The Frog had croaked I believe.

I work at TCU and this theater was demolished in order to build the new campus bookstore.

This opened on October 24th, 1946. Grand opening ad in the photo section.

Cinemark began showing X-Rated films on February 15, 1979 which wasn’t well received. It closed with X-rated films on March 31, 1979. It was reopened by Texas National Theaters Circuit on April 1, 1979 with the Spanish language films starring Cantinflas, “El Extra” and “Bajo el Imperio del Hampa.” In April of 1991, it became a live venue under the same name. On November 5, 1993, it became Stage West continuing as a live venue.

On April 8, 2005, it became the Frog Theatre as a live venue, second run movie house, and alcohol-free coffee shop showing the film, “Napoleon Dynamite.” It closed in May 2005 and was torn down in August of 2006. Because it was the TCU Theatre neighbor to Texas Christian University (TCU) from 1946 to 1993 (47 years) and was the Frog Theatre for one month, I would make a suggestion that the theater really should be the TCU Theatre (aka T.C.U. Theatre, Stage West Theatre, and Frog Theatre)