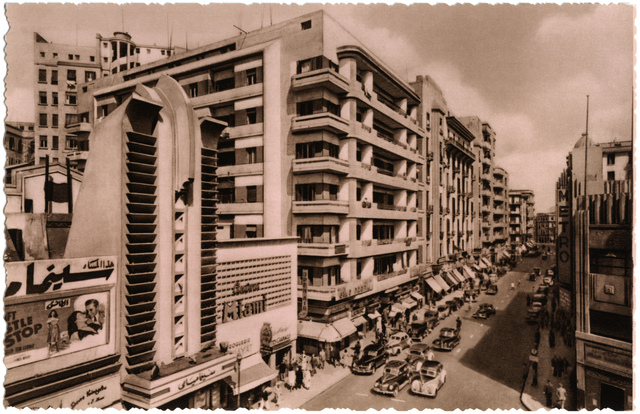 This cinema displays its name solely in large Arabic script on its facade, but fortunately its name was revealed to this writer by his guide. In Egypt, this name is pronouced MEE-am-ee. The white stuccoed facade is divided into bays by vertical streamlined fins. The central bay over the entrance is almost completely occupied by name and billboard space, where colorful illustrations promote the latest attraction.

The Miami Cinema is located in the city centre at 38 Talaat Harb across the street from the more well-known Metro Cinema and Adly Street. It was opened prior to 1950 and played Arabic films.

A photo and some text on the Miami Theatre here:
http://www.hsje.org/cinema/cinema_miami.htm

Cairo (AP)– A woman was killed and 30 persons were injured when a time bomb exploded last night |in the Miami Movie Theater in downtown Cairo. The explosion occurred during the playing of the Egyptian national anthem and threw the audience into a panic. Crowds massed around the theater as the injured, including some British soldiers, were carried out.

Here’s a vintage view of Soliman Pasha street with the Metro on the right (and the Miami on the left), from my postcard collection:
View link