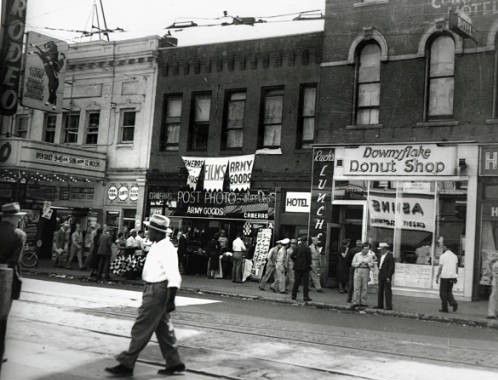 After successfully showing Keystone Studio films at the independent Palms Theatre in 1913, Mutual Studios - the releasing company for Keystone - had the new-build Keystone Theatre designed by Fermer S. Cannon to additionally house the local branch of Mutual Studios Releasing offices. The Keystone launched on a 10-year lease on May 1, 1914. This was timed out well with the ultra popular Charlie Chaplin films that he made in his contract with Keystone in 1914.

Keystone Studios faded three years later but the venue kept its name for the run of the lease.The main advantages for moving the Keystone titles from the Palms to the Keystone was their popularity outstripped the diminutive 300-seat Palms and Mutual could get a more favorable split of the revenue by eliminating the independent Palms operator into the owned and operated 600-seat Keystone. Once Chaplin left Keystone and better movie venues were built, the Keystone just slid tier by tier under several operators to oblivion.

The Keystone had been an important part of Indy’s “Movie Lane” / “Film Row” which found so many theatres packed into a small part of town; these theaters included The Palms / Alamo, the Lyric, the Lenwood, the Alhambra, the Ambassador, the Crystal, et al. The theaters were close to the Terminal Building - a main hub of activity in downtown Indianapolis. At the end of its initial lease, the theatre was renamed as the Alamo Theatre beginning April 13, 1924 on a new 20-year lease. At the end of that lease, it had a final15-year lease renamed as the Rodeo Theatre playing westerns for the most part beginning on November 16, 1945. It was later demolished.