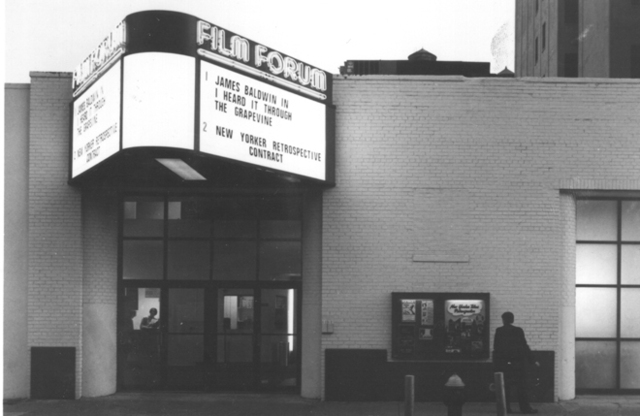 The previous home of the Film Forum was operating from September 9, 1981 until September 4, 1989 when closed and was demolished. The theatre’s current home is at 209 W. Houston Street.

I believe this theatre closed in ‘89 and there was a hiatus of about a year before the new Film Forum opened on Houston Street.

I don’t remember going to the Film Forum all that often in eighties, though I wasn’t as into film back then. I remember the first time I went there I caught RED RIVER for the very first time. I also remember for some reason they revived ALIEN. I remember going to a late screening on a Sunday night and it was raining out. It was not a well attended screening and I had the **** scared out of me.

I also remember seeing a terrific indie film here called BLESS THEIR LITTLE HEARTS, which I caught again recently at BAM. It held up very well.

And I can remember one night trying to get into CHINATOWN and it sold out.

Does anyone remember what the booking policy of the FF was like in the eighties here? I wonder why I didn’t go more often? Was it similar to the new Film Forum, which does have an additional screen.

There is a small ad here for Film Forum in 1982.
View link

If I remember correctly the two cinemas in the original Film Forum were positioned side by side. They were small but comfortable and didn’t have that tunnel effect that you get in that one auditorium at the present site. I saw the original run of Gus Van Sant’s MALA NOCHE there and the restored print of THE BOYFRIEND.

The Film Forum was initially located in a loft space on West 88th Street, followed by moves to 80 Wooster Street (which also housed Anthology Film Archives, prior to their move to the Second Avenue Courthouse building; I’m pretty sure 80 Wooster has since been converted to residential space) and 15 Vandam Street, which currently houses the Soho Playhouse (and formerly the Thalia Soho and Le Cinematheque). The programming at 57 Watts Street was one screen of limited-run premieres and one screen of revivals; without the third screen, few of the premiere engagements moved to other theatres in town when their runs at the Film Forum ended.

(On a bit of a side note, does anyone know whether the 57 Watts Street space was built specifically for the Film Forum or, if not, what it previously housed?)

Here is the image I posted on the Houston page by mistake.