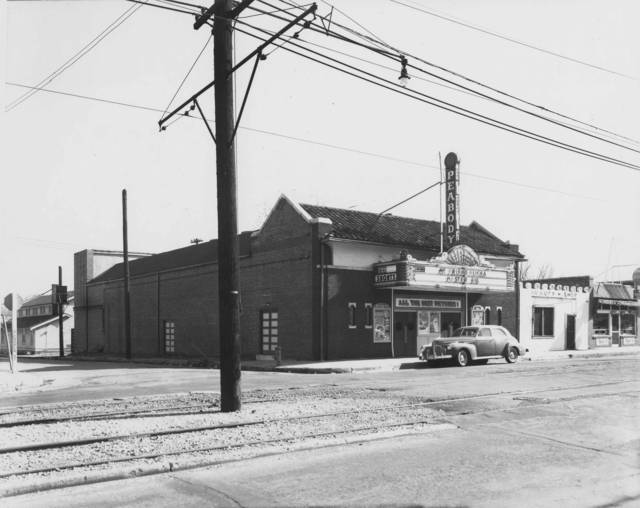 The Peabody Theatre was constructed in the Cooper-Young neighbourhood in 1926 and was one of the few neighbourhood theatres with a traditional oblong marquee and vertical sign. In 1943, photographs were taken of the exterior, lobby and auditorium. That same year there was an explosion and fire, which resulted in a death. After, it became a commercial space (now Memphis Drum Shop) and rumors persist that it is haunted.

The Peabody building was still standing when I left Memphis in 1993 and a quick look at GoogleEarth shows what appears to be the building still standing (whenever that photo was taken anyway). When I saw it, the building had been converted into a stained glass studio. The floor had been leveled for the most part, except at the very back of the building. The stage and part of the original sloping floor were still exposed. The foot prints from the seats and the outlines of the carpet runners were plainly visible. The stage was just deep enough to hang the screen, a main curtain and put in a speaker: maybe 10 feet. There was no decoration surviving that I remember. There were no organ chambers or a pit, as some of the small neighborhood theaters in Memphis had. I infer from this that the Peabody was built after 1927.

It’s a wonderful drum store! It has a separate room for cymbals and a studio for performances and clinics. It’s a drummer’s dream!!

The manager showed me where the candy counter used to be and the spiral staircase that went to the projection room. He showed the old sloping floor leading to the storage area and the original brick blackened by a long-ago fire. He believes the old theatre opened in the 1940’s and closed in the 1950’s. It has been the Memphis Drum Store since 1991 or 1993. What fun I had on this little visit!

At the link below are some more recent photos of Peabody Theatre/ Memphis Drom Shop:

I found an early photo of the Peabody Theatre in the book “The Wurlitzer Pipe Organ, an Illustrated History” by David Junchen and Jeff Weiler on page 150. It is a reproduction of a 1927 Wurlitzer advertisement showing several small theatres equipped with Wurlitzer “Organettes” or photoplayers. The Suzore (q.v.) and The Peabody Theatres in Memphis are both shown having these little instruments.

The building is the same outside but the interior is completely gone.