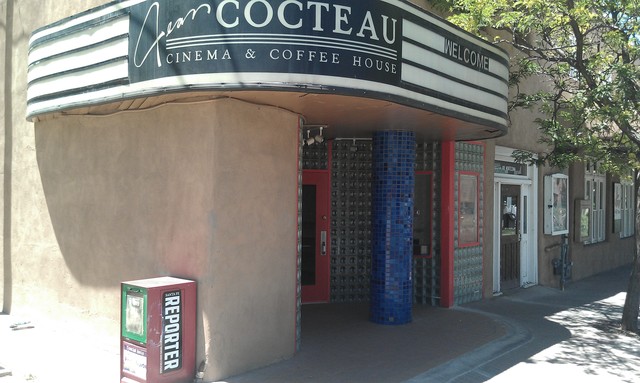 Opened as Collective Fantasy on June 18, 1976. It was renamed and reopened as the Trans-Lux Jean Cocteau Cinema on May 4, 1984. One of Santa Fe’s most beloved movie theatres, the Jean Cocteau Cinema was home to some of the best independent and foreign films shown on screen. Winner of the Santa Fe Reporter’s “Best of Santa Fe” for 7 years in a row (through 2005), and winner of Crosswinds Weekly’s “Best of New Mexico” for 2 years in a row! The Jean Cocteau featured a full coffee bar, with plenty of espresso and coffee drinks on the menu, as well as the best popcorn in town, topped with yeast, parmesean and other great ingredients!

The cinema closed on April 16, 2006, and there were plans proposed at that time to convert it into a cinema museum. It was purchased by a new operator and re-opened on August 9, 2013.

By Polly Summar
Journal Staff Writer
It may be good news that the New Mexico Film Museum has finally found a permanent screenâ€" at the Jean Cocteau Cinemaâ€" but the more immediate concern for locals is this: The Jean Cocteau is closing.
“Effective mid-April,” said Thomas Becker, co-director of operations for Trans-Lux Southwest Corp., which owns the Jean Cocteau on Montezuma Street and some 10 other theaters in the Southwest. “As Santa Feans know it, it will no longer be a conventional theater, but I don’t know the long-term plans."
At this point, the state doesn’t know the long-term plans, either. "The legislation (which transfers the film museum from the Department of Tourism to the Department of Cultural Affairs) doesn’t take effect until July 1,” said Stuart Ashman, cultural affairs director. But officially the state begins leasing the theater on May 1.
“We saw the opportunity,” Ashman said. “The people from Trans-Lux were going to close down the theater and we thought it was our opportunity to do something."
The board of the film museum will be reconvened, Ashman said, and they will decide what to do with the theater. "But now we have an official place to meet, a facility that has everything you needâ€” a screen and every kind of project equipment,“ said Ashman, citing 35 millimeter, 16 millimeter and DVD. "It could also run dailies when they (film companies) are actually shooting films in town."
Ashman said definite plans would be up to the board and the newly named temporary executive director, India Hatch, who was interim director of the state Gaming Control Board, according to an Associated Press report. Prior to that, she ran the New Mexico Racing Commission.
But as an example of what the theater could be used for, Ashman said the American Film Institute offers packaged programs on specific educational themes. "Comedy in the silent era, for example,” Ashman said. “You could do two or three weeks of films and a series of lectures.
Ashman and Becker commended Tesuque resident Richard Brandt, former chairman of Trans-Lux and former president of the American Film Institute, for his support of the leasing of the Jean Cocteau to the state.
Becker said he couldn’t comment on the financial terms, but Ashman said the state will be paying $7,000 a month for the theater.
"What I can comment on,” said Becker, “is that it’s increasingly more and more difficult to book a single-screen art house commercial theater,” adding that there may be theaters going into the nearby Railyard space and that Regal Cinema was building on Cerrillos Road.
“You’ll have 22 to 24 screens within the next two years in Santa Fe,” said Becker. “Years ago, art product/alternative programming was strictly shown in venues like the Cocteau, but with more screens, they tend to play product like that in larger multiplexes. This agreement we have is a way to keep the Jean Cocteau alive."
Becker said Trans-Lux wanted to keep the theater going as an artistic outlet. "Too many theaters close and turn into commercial space,” he said.
Trans-Lux Southwest is part of Trans-Lux, whose larger business, Becker said, is the design and manufacture of LED electronic display systems.

It is very sad that this theater has closed. Whenever I visited Santa Fe one of the first things I did was but a newspaper to find out what was showing at this theater. A small intimate seating area was quite comfortable. My abiding memory will always be that there was a small wood fireplace in the coffee shop area. It was a slice of heaven to see a film at this theater.

From my visit yesterday (6/26/11), the Trans-Lux appears to be For Sale. Noticed some wear on the outside.. some marque damage (rot on the underside).. but lobby didn’t look bad (though very small). Didn’t get inside, but would love to see pics.

Read in the Albuquerque Journal (2/11/13 “Business Outlook” insert, page 12) that Bank is foreclosing on this property. Owner (Trans-Lux Montezuma corp) is in default of their $2M morgage loan from 2007. Building is currently listed for sale by Barker Realty for $1.9M

My husband and I had a wonderful date at this theater the year before we were married in 1986. The film we saw was “A Room With a View”. We had never been to a small, intimate theater setting and the desserts and coffee offerings were very original to the experience. The staff was hip and friendly. Years later, we thought it would be wonderful if our small town outside of Boulder could support a similar movie venue. I would love to see our towns support these intimate movie theaters again. Santa Fe would be the perfect city to bring back such a theater as the Jean Cocteau. I would travel down from Boulder to be the first in the seats.

The perfect town for an arthouse. If the new owner reads these posts: I am an experienced theatre manager and I’m available.

Jean Cocteau Cinema is reopening August 9, 2013. The hall is no longer under the ownership of Trans-Lux, but has been purchased by George R.R. Martin, the sci-fi and fantasy writer whose novels serve as the basis for the HBO series GAME OF THRONES. FORBIDDEN PLANET will be the opening title, along with Jean Cocteau’s ORPHEUS and DARK STAR.

“Game Of Thrones” premiere. Copy and paste to view.

This opened as the Collective Fantasy on June 18th, 1976 and renamed and reopened as Jean Cocteau on May 4th, 1984. Both grand opening ads are in the photo section for this cinema.