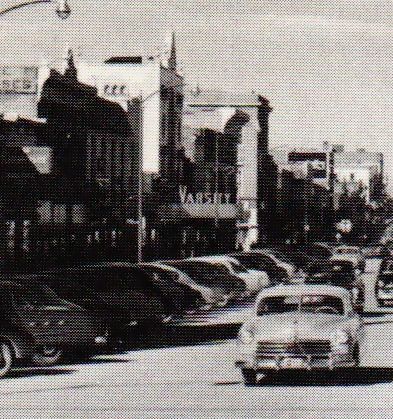 The Varsity Theater in Lawrence, Kansas was opened October 26, 1926. It was equipped with a Reuter organ. By 1941, it was operated by Commonwealth Amusement. It was remodelled in 1965 and was closed September 1, 1997. The building is now used as a clothing store.

The Varsity underwent major remodeling in 1965, after the original owners, Mr. and Mrs. McCurdy, sold the house to the Commonwealth Theatres circuit.

Boxoffice Magazine of October 4 reported that the Kansas City firm of Milton Costlow & Associates designed the $100,000 project, which involved the demolition of the proscenium to expand the auditorium into the former stage area, the removal of the original ceiling, and the rearrangement of the lobby and foyer.

Space formerly occupied by tenants in the building would be used for theater facilities as well. The house would be entirely reseated and carpeted, and the booth would be equipped for both 35 and 70mm projection.

Closing date was Monday, September 1, 1997 with John Travolta and Nicolas Cage in John Woo’s FACE-OFF. Owner Hollywood Theaters also locally closed the Cinema Twin (currently unlisted on CT) that day at 3110 Iowa, which had become a dollar house and was featuring George Clooney and Arnold Schwarzenegger in BATMAN & ROBIN and Nicolas Cage in CON-AIR. Info courtesy that day’s Lawrence KS Journal-World, pp 6B.