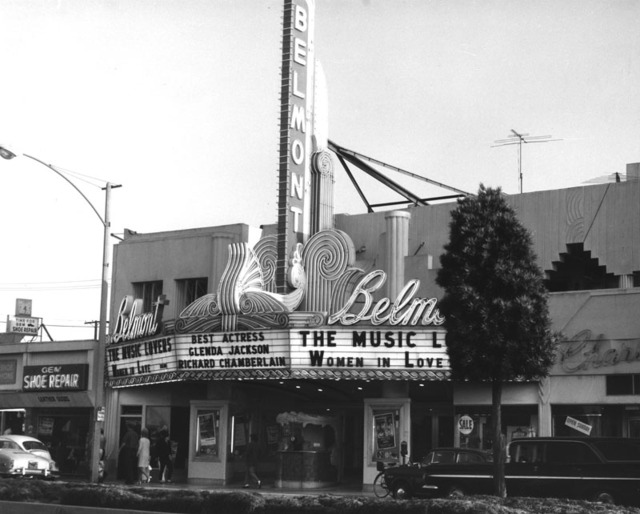 The Belmont Shore Theatre was opened on June 28, 1929 with Eddie Dowling in “The Rainbow Man”. From March 1939 operated by Fox West Coast Theatres as the Belmont Theatre. It was renovated to the plans of architect Kenneth S. Wing and reopened on May 19, 1949. It was closed by Mann Theatres on September 6, 1977 with Liza Minnelli in “New York, New York”.

By 2018 it was operating as the Belmont Athletic Club gymnasium

I think if you were around the theater everyday like I am, you would appreciate the photo more. The gym is very drab. I liked the color, which certainly is not part of the building now.

Ken mc: Interesting photo you just posted. I didn’t know there was a “second” marquee on the theatre, that trapezoid being a very typical example of what Fox put on their houses in the late 30s. So that one existed between the original, rather understated rectangular marquee, and the wild neon one from the Skouras remodeling, which is the one I remember vividly from my childhood, which in the late 60s/early 70s, was excellently maintained, and I loved just looking at it and watching the animation of all that neon. I still remember the ways in which some parts moved.

Here is an article from the LB Press-Telegram dated 9/20/77:

The Belmont Theater has ended a nearly 50-year engagement spanning the dawn of talkies to the hits of the 70s. The Belmont, located in the heart of Belmont Shore at 4918 E. Second St., has become the fourth Long Beach movie house this year to sell its last box of popcorn. Earlier this year the roof of the Towne Theater at 4425 Atlantic Ave. fell in and the movie house was put up for sale for $500,000. About a month ago, Mann Theatres Corp. closed the downtown Imperial Theater on Ocean Boulevard just east of Long Beach Boulevard. The Plaza Theatre on Spring Street also closed recently. And on Sept. 6, the final movie, “New York New York,” played at Mann’s Belmont.

“It (the Belmont) didn’t do us any business,” said Gary Goodgame, a property manager for Mann Theatres in Los Angeles. “We’re getting rid of old houses and building new ones,” he said. Mann has no plans to build any theaters in Long Beach, he added. Another reason cited for the closing of older theaters is increased competition from new multiscreen theaters in shopping centers.

Greg Schultz, a leasing agent for Coldwell Banker, which is handling the Belmont, said the theater could not compete with the recently built United Artist’s Movie 6 at the Market Place on Pacific Coast Highway. Schultz said Mann sold its long-term lease on the Belmont to a private investor. He would not reveal the selling price or the name of the buyer. “Theaters don’t usually pay the kind of rent we’re asking,” he said, adding that a theater probably won’t be the new tenant.

He said he has discussed the leasing of the 10,000-square-foot theater with local business groups and city officials. “We’re trying to do something to benefit the community,” he said. Although Schultz would not say specifically what is planned, a spokesman for Mann said he understands a number of small shops will be housed in the building. Goodgame said Mann is looking for a tenant to lease the Imperial Theater for movies or other businesses.

Mann has no plans to sell its other theater in Long Beach, the Crest on Atlantic Avenue. Another downtown theater, the State at 104 E. Ocean Blvd., also closed several weeks ago. Leasing agent Jeanice Allen said the theater was closed for repairs, but no date has been set for reopening. The theater, located in the Jergins Trust Building, is owned in part by John Paganelli of San Francisco.
The closing of the Belmont has led to a flurry of calls to Schultz at Coldwell Banker. He said the now boarded-up theater was built in about 1929. Its rococo marquee apparently will remain empty, for there are no coming attractions.

From L.B. Heritage.com
Reginald F. Inwoodâ€™s name first appeared in the Long Beach
Press-Telegram in 1928, as architect of the Art Deco Belmont Shore Theater at 4918 E. 2nd St., corner of St. Joseph Ave. George T. Gayton was the contractor. The theater, completed in 1929, was owned by H. A. and W. C. Woodworth and was built especially for â€œtalkies.â€ The building included seven stores on the first floor and apartments above. It reputedly cost $120,000.The exterior of the theater was painted blue-green and had geometric ornamentation. A portion of this dÃ©cor can still be seen on the exterior, but the murals inside that featured Diana, the Roman goddess of the hunt, a snake charmer, and exotic birds have been removed.

A screencapture from the long-forgotten 1976 Craig Denney film THE ASTROLOGER features the Belmont marquee presenting the premiere of the film-within-the-film, also called THE ASTROLOGER: 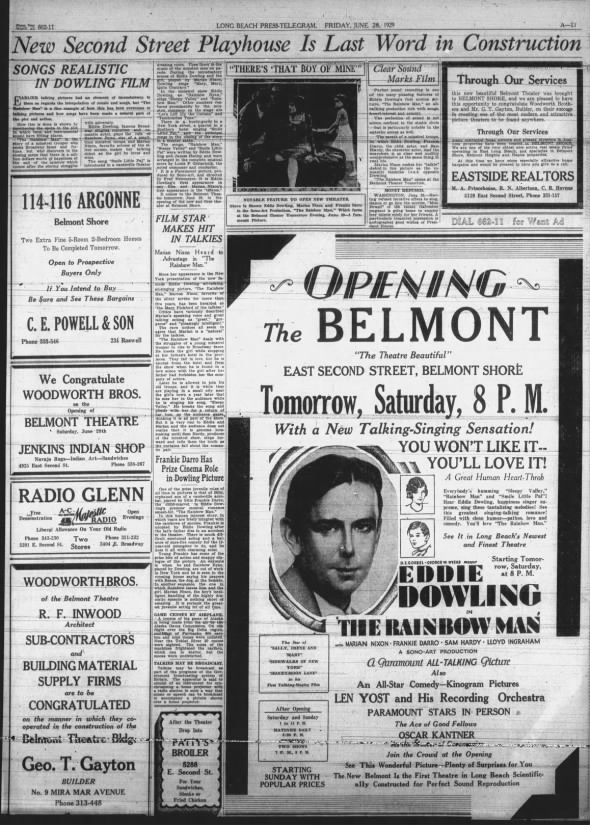 When the UA Movies 6 opened in 1976, the multiplex was the death knell for many of the area’s long-standing theaters. In 1977, the Towne, Imperial and Belmont ended decades' long runs. Mann closed the Belmont on September 6, 1977 after showings of Martin Scorsese’s “New York, New York.” (An article in the local paper ran on September 20, 1977 mentioned the closure without a date and it likely how the incorrect date of closure is listed as September 19, 1977 in the CinemaTreasures synopsis above. The theatre had already closed and was listed for sale.)