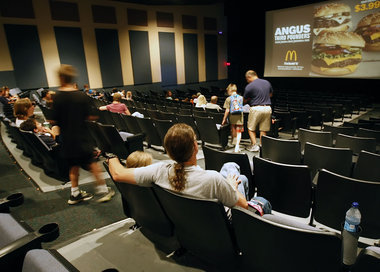 This was the first continueous loop platter system I ever worked, this theatre was built on the site of an old grocery store, inside the Colonial Park Mall. They had just tore down the old Eric 1&2, originally The Trans -Lux witch sat in the mall by itself.
The first Manager was Fred Wonders, who worked his tail off trying to get it open. Only to be rewarded by being fired, typical theatre chain. I think when it first opened it was an Eric, or a UA, can`t remember witch one.
Dave Grau (Mungo)
Norelco

The Colonial Commons 9 was originally designed as an 8 Plex with 4 large and 4 small auditoriums. At the last minute as construction began they decided to split one of the large auditoriums so the theatre eneded with nine screens.

Mark this one closed as of November 28, 2010. It was ironically a victim of its own success.

When it opened in May 1991 the Central Pennsylvania theatre market consisted only of aging twins and older outdated theatres – most of which had poor presentations.

The staggering boxoffice success of the Colonial Commons over the next five years sparked a multiplex building frenzy such that between 1997 and 2007 the Central Pennsylvania market became so vastly overscreened that no one was making any money.

That story can be true in a lot of medium size cities,Muviebuf.

An article about the closing: View link