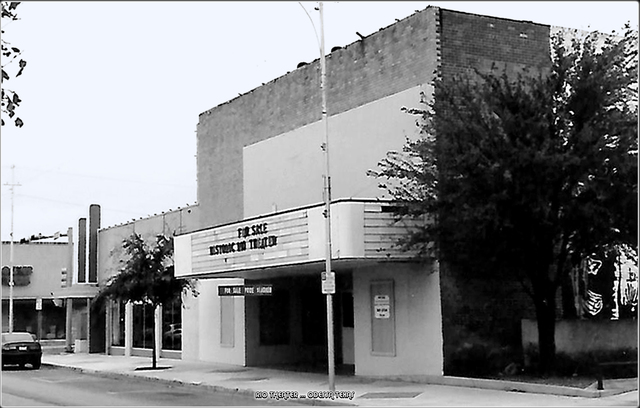 Opened as the Scott Theater on February 1, 1947 with “Blue Skies”. It was renamed Rio Theater on January 28, 1959 (when the towns' new Scott Theater opened). The theater is closed and had a for sale sign on it. At one time a church was trying to acquire the building.

In 2010, it was announced that the Rio Theatre would be restored for use as a live performance venue. Click the link below for photos. Any updates on the former Rio Theater would be appreciated.

Update— The roof is 99% repaired and we will be moving inside to start restorations on the main auditorium and stage. Renovations are moving a little slower than expected but are moving forward. I found sections on the roof that I went ahead and replaced all the way down to the rafters. Figured if I’m going to fix it then I might as well do it right the first time.
We have a new page on Facebook with lots of pictures. See the progress we make and comment if you like.

We would love to hear stories from people who have been in the theater:)

btw…..The history of the Rio is close……but not quite accurate. I have the complete story if anyone is interested.

The Rio History above by me Billy Holcomb is Correct.
I have documented proof of what I listed.
I spent years finding the exact dates of openings—closings-operations.
I traced and searched it out to a complete history of all 3 buildings from actual plans/city directories/newspapers/ and
actual owners from the late Mr. Scott in 1959, and Boots Scott
thru the ninties, and many owners & decendents of owners of all
theaters.
In fact My book on the Odessa Theaters can be viewed in the
Southwest Archives at the library in Odessa-
Anyone who claims to have the complete history has to have gotten it out of my laborous toils to get it from forever being hidden.
It was me who did the work—IT IS RIGHT…Billy Holcomb

I urge evryone to check out all the Rio pictures on Don Lewis Vanishing Theaters SEE ABOVE —
ALL 3 RIO STRUCTURES ARE THERE, an notice Billy H Provide the pictures having worn myself thin diggin while others set themselves up stealing, and professing to know what is what..
The Rio was wonderful—Provided entertainment for troves of people
who spent hours in its magic, and can spout memeories in volumn.
billy h.

I just noticed Cinema Treasures has 3 sites for the Rio, So I am
transfurring my history of the Rio beginnings, so it will be here
with mostly most comments on the current Rio.
The structure was first opened at 120 West 4th street as the Palace
Theater by Joe Rice in October, 1927.
It was Odessa’s second theater, and equipped with 400 seating.
Located directly behind the Odessa Theater, which had also been opened by Mr. Rice.
In March 1928, H.T. Hodge founder of H & H Theater with headquarters at Abilene took over operations of the Palace & Odessa Theaters.
Hodge put his son in law Jack Laird in charge(Laird’s son still resides in Odessa)
Laird & Hodge were also instrumental in later openings in Odessa of
the Ector/Plaza/Texas/Lyric & Broncho Drive In.
The Palace fell into bad times during the big depression, and closed
in July 1932.
On March 30, 1934 James King reopened the theater as the new State,
but found out it was a chore competing with H & H Circuit, and threw
in the towel closing the State in early 1935. >> ENTER THE RIO.
The Scott Family reopened the theater in 1936 renaming it to the RIO.
This Rio was in oepration for 6 years, when the Scott’s built a NEW RIO at the corner of 6th & Grant with an 800 seating capacity, which
was the second RIO in Odessa.
This RIO was in operation for 15 years when it was destroyed by fire.
The walls only survived and can be seen at the corner site.
The Scott was built in 1947 next door to the Rio, and was operated
until 1959 when demand caused a new Scott to be built which I think
still stands but in disaray.
The RIO Marquee in limbo a couple years was brought out and went up
on the original Scott, and 50 years later after many up & downs with
changes and owners the first SCOTT building is still rememebered as
the RIO———-Hope this clears up some of the RIO’s foggy history.
I will be providing Don’s Flicker site with a number of old original
ads from all 3 historic RIO’S—CHECK OUT HIS SITE FOR PICTURES OF ALL OLD ODESSA MOVIE THEATERS.
ANYONE WHO WOULD LIKE TO SEE SOME OLD ADS OF ANY ODESSA THEATERS
EMAIL ME Billy Holcomb———-sorry for outburst
Abilene

Mr. Holcomb, Thank you for your outburst:) It really is appreciated. Obviously the, hand-me-down, information came from the realtor who sold me the building. Would love to visit with you and see the pictures. With proper consent and credits I would also like to display the photos in the theater when we get it open.
Thanks again for your response, research, and details concerning the theater.
Sincerely,
Bruce Beaird

I haven’t seen anything happening to the Rio in a while. Is it still being restored or is it back on the for sale list?

JohnnyC, I moved the article to the Rio (4th St.) listing. Still digging through the newly digitised newspaper archive for Odessa for more. stand by.

This opened as Scott theatre on February 1st, 1947 and reopened as the Rio on January 28th, 1959 (Same night as the new Scott). Grand opening ads in the photo section.