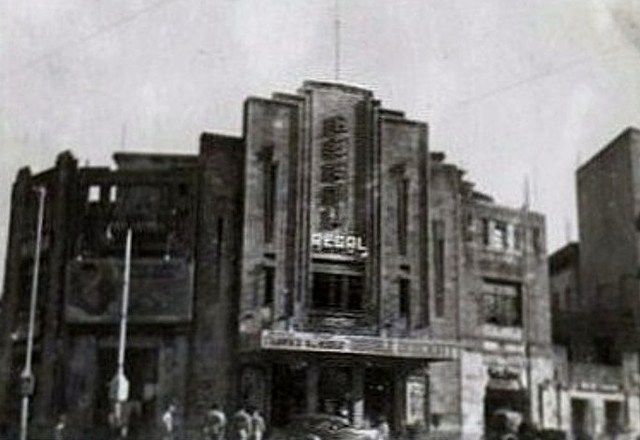 The Regal Cinema is one of the few old style movie theatres still operating in the city of Mumbai (Bombay). It is located in the central district of Colaba Causeway.

Designed by architect Charles F. Stevens who was the son of famous 19th Century architect Frederick W. Stevens, it opened on 14th October 1933 with Stan Laurel and Oliver Hardy in “The Devil’s Brother” and was Bombay’s first Art Deco styled cinema. Seating was provided in stalls and balcony with some box seating and the total capacity when first opened was larger than current seating given in the headers above.

Built entirely with re-inforced concrete it had an underground car park that was reach by a lift from the cinema. It was also fully air conditioned. The interiors were designed by Czech artist Karl Schara and featured a lot of mirror work in the lobbies. The main auditorium had a motif of sun-rays in pale orange and jade green.

It has been recently restored but keeps its original old world charm, dark wood interiors and satin furnishings. It plays a mix of Hindi and English language films to a mainly up-market audience.

Here is another 2009 photo:
http://tinyurl.com/y8emnod