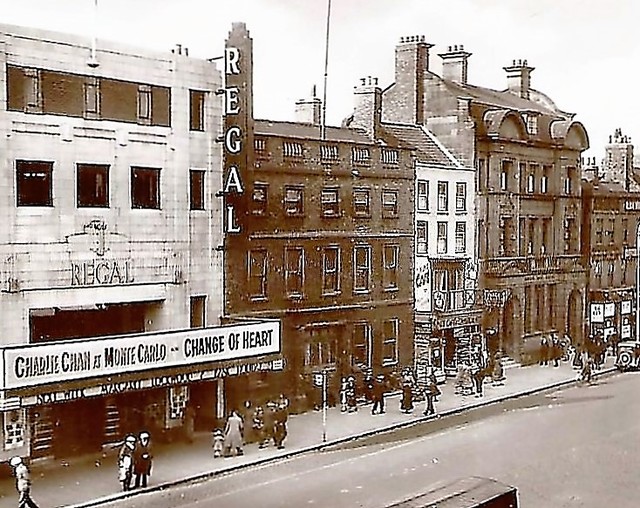 Originally opened as the Regal Cinema on 22nd April 1935, it was taken over by Oscar Deutsch’s chain of Odeon Theatres Ltd. in 1944 and re-named Odeon from 12th March 1945.

I started work at this cinema in 1955 with the film “Picnic”. It was a very busy cinema and had a very busy restaurant. It was discovered that one of the supporting walls was sinking, and was closed on 3rd September 1966. The manager was Bernard Goldthorpe and the chief projectionst Stan Close.

It was demolished and a new Odeon was built on the site, which opened on 25th April 1968. This has its own page on Cinema Treasures. It became a nightclub, named The Mall, then Visage, then Zanzibar and by 2013 was named ‘GLAM’, which had closed suddenly on 15th June 2013.

An exterior photograph of the Odeon Stockton-on-Tees taken in 1949:
View link

John;Thanks for your input and the photograph. However, this page is for the original Regal/Odeon which was demolished and the ‘new’ Odeon you pictured was built on the same site.

Hope you can post you photograph on that page! Thanks

Bernard Goldthorpe and Stan Close continued in their respective roles in the replacement Odeon and I knew them well. I was Bernard’s assistant manager from late 1969 and took over the cinema when he was hospitalised with a heart condition during 1970. Mr Goldthorpe was a most enthusiastic manager and a lovely man, his wife and family were most supportive and would invite me to join them for Sunday lunch while Bernard recuperated. He was always keen to hear of my latest attempts to boost the Odeon’s profitability (with new 70mm. product becoming thin on the ground and our cinema mainly depending on the Rank Release, we were struggling as a proportion of the rebuilding cost was still coming out of our profits every week and we were sharing programmes with the Odeons Middlesbrough, Darlington and West Hartlepool). On Flickr as “Fanatical about Odeon”, I have posted pictures of the new Odeon’s interior and exterior and a ticket for the opening performance.

Original Odeon Front Of House taken in 1949 whilst presenting ‘Down To The Sea In Ships’. As with most cinema exteriors (in fact most buildings) during the post war austerity period it would appear that the combination of the war years and the fossil fuel economy have taken their toll……

Did the Odeon have live shows , I used to go when I was small and can’t remember any.

There were indeed live shows at the Odeon and two names which come to mind are Adam faith and Dusty Springfield. The Hippodrome, Dovecote Street also had ‘one night stands’ but the main venue in the town was the ABC Globe and the likes of The Beatles and The Rolling Stones used to play there.

1966 photo of FOH uploaded when one of the last films at the ‘old’ Odeon was showing.