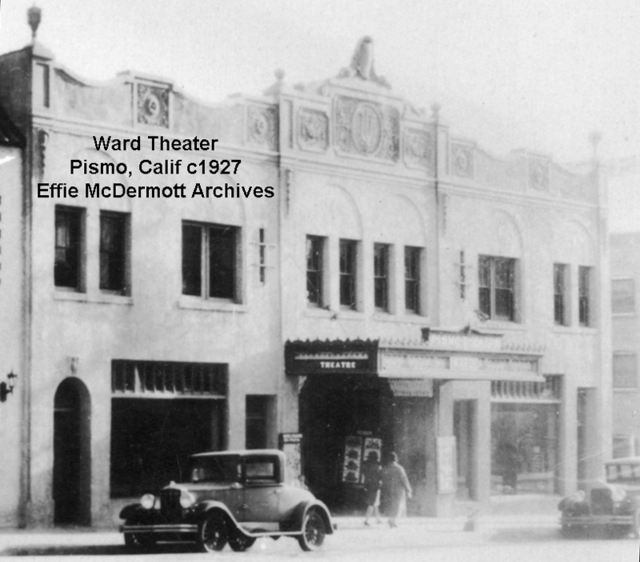 The Central Coast Theater was opened in 1927, designed by architect O.C. Williams of Los Angeles. By 1941 it was known as Wards’s Theatre.

Today, the lobby area is a t-shirt shop and the auditorium is a pool hall with a small area in the back (where the stage was) that sells beer and fish and chips. Many of the Art Deco style touches remain in the auditorium.

This theatre has a 20s exterior, but the interior is definitely a moderne remodel. It is worth going inside. The stage flytower once had painted and neon letters simply reading “THEATRE” on all sides, which were visible from the nearby freeway. the sign on the rear wall of the stagehouse also featured remnants of a mural, perhaps a forest (it was badly weathered). The signs were repainted to read “BILLIARDS” several years ago.

My and a few buddies back in 1991 partialy renevated the theatre and opened it as the Pismo Beach Central Coast Theatre. Prior to us a sit down dinner playhouse was there who cut the movie screen into a arched opening. Prior to the Dinner/Playhouse was a promotor who had rock bands such as Blue oyster Cult perform. The promotor at some point held a event were he stole the box office money and left town no longer to be found. In 1991 we rented the building and restored 800 seats that were original to the buildings movie days. Other improvements were made. I was in a rock band called Delicate Edge and we all put our money together to open it thinking we could make money to support our touring. The city refused to support us and even mandated we only could have Country music. Allthough this was a battle we still had performances such as Elvin Bishop, Foghat, BTO and many others. After constant pressure from the city with our entertainment licence we were forced to produce plays such as Dracula. we eventual left becuase we financial problems. This builing was rumored to host performances by Charlie Chaplin for Hearst privatly. Hence the old back drop of the Garden(Hearst’s garden). It is a shame to hear someone has painted over such a Historical art piece. Radio address’s were broadcast from the Theatre during World War II. A floor has been built over the seating all the way to the stage were a Bar has been installed. The records I have from the Owner we rented the building from is that it was built in the 1920’s. I still have lots of Parafanelia from the time we ran the Theatre. If you would like more information on the Theatre please feel free to contact me at

I only hope somehow this building could be put on the Historical Landmarks registry and be saved. It is my belief the City has poorly underestimated its Historical importance. If someone dose not do something it will be lost forever. Just thinking now it has been turned into a Pool Hall is horrible.

Summer 1990 or so I was in an original musical production run out of that theatre. “Look At Me” was produced/written/directed by Richard Inman (not of gay rights fame i dont think) and co written by Richard Green. It was kind of a wacky look at a talk show host and the happenings on his television show. I had heard this theatre had burned down not too long ago. Hope not. At the time it was pretty run down. The run didnt do too well and I think that was the one show that company tried to make work there.
but it was a blast!
if you know anyone that might have been part of it.. or knew the folks.. forward my e-addy

In 1963, the Pismo Theater was part of Hardy Theaters, a chain that had houses in Oakland, San Francisco, Fresno and Pismo Beach. Headquarters was in San Francisco, and the president was Gerald Hardy.

The June 28, 1947, issue of Boxoffice says: “July 1 is opening of the new Pismo Beach Theatre, operated by Westland Theatres. Al Chamberlin will manage the first-run house.”

The Ward (or Ward’s) Theatre is mentioned as early as 1929 in Movie Age, and is mentioned quite a few times in Boxoffice in the 1930s and early 1940s. The most recent mention of it in Boxoffice is in the February 9, 1946, issue, in an item not about the theater itself but about the owner’s daughter who had been hospitalized after driving her car into the front door of a local bank.

That the Ward vanishes from the magazine before the Pismo opened is another indication that the Pismo was probably the Ward rebuilt. Another indication is a card in the California Index citing a 1948/1949 theater catalog which attributes the design for the remodeling of the Pismo Theatre to architect Vincent G. Raney.

The May 7, 1927, issue of Building and Engineering News said that O. C. Williams was taking bids for construction of a theater, office, and store building to be built at Pismo Beach for W. W. Ward. The architectural style of the Central Coast Theatre indicates a late-1920s construction date. I’m sure the Ward Theatre and the Pismo/Central Coast Theatre are one and the same.

O. C. Williams, who had a Los Angeles address, might have been the architect for the project, but I’ve been unable to discover if he was indeed an architect. He might have only been a builder or general contractor.

I remember seeing Rock Music movies (Pink Floyd – “Live at Pompeii” & ELP “Pictures at an Exhibition”) there in the mid-70’s. I think “Rocky Horror” had a midnight run there for a while as well. They also had rock concerts there. I saw Randy Hansen do a fantastic show there in October, 1979. It’s really a shame that the theatre hasn’t been preserved. It’s really a great piece of California History.

The July 8, 1927, issue of Film Daily says that O. C. Williams was indeed the architect of the theater being built at Pismo Beach for W. W. Ward. The location of the new theater was given as Dolliver and Pomeroy, so there can be no more doubt that the Central Coast/Pismo Theatre and the Ward Theatre of 1927 are the same house.

I hosted a Sci Fi convention there on Dec 17, 1978 (before cons became big business). Forrest J Ackerman and Robby the Robot were there. Great place for a convention because we could use the professional projection system rather using a sheet on a wall. Great time but I lost a bundle. :)

Pismo Theatre marquee in on the right in various enlargements of the photo in the below link.