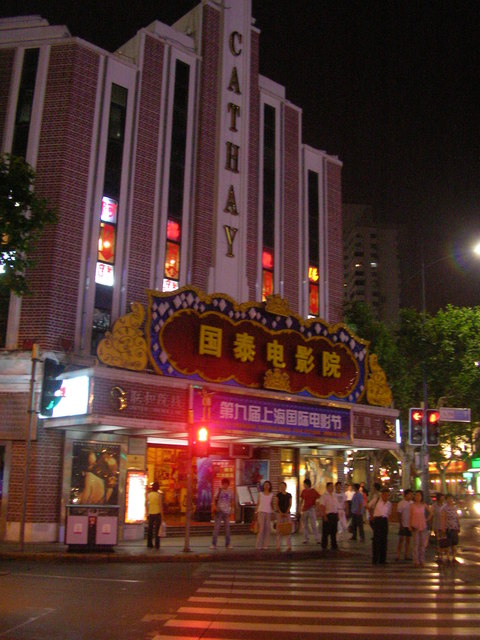 Located on Huaihai Road at the corner of Maoming S Road. The Cathay Theatre is one of the few historic 1930’s Art Deco style cinemas that is still open in Shanghai. It opened on January 1, 1932, with 1,080 seats, all on one main floor, and with an American movie, the drama “A Free Soul” starring Norma Shearer. For a while, it was part of millionaire Victor Sassoon’s holdings. In the early-1990’s, it was granted municipal preservation status.

In 2003, the auditorium was triplexed, with no original internal décor remaining visible. The Cathay Theatre continues as a first-run cinema, screening a mix of Chinese and Western films.

The Cathay cinema was built during 1930 and 1931, and opened on January 1, 1932, with an american movie called ‘Free Soul’. Until 1949 it played mainly English and American Films, using Chinese subtitles and earphones for spoken translation to Chinese. The original technical outfit from the US (‘Simplex’?) was used until 1964.

Originally the Cathay had 1080 seats, placed in ca. 30 rows in a flat, rectangle hall without balcony. Ceiling structure and lights were squares – I don’t remember to spot anything round in that room. In the early ninetees it looked as if nothing had changed for 60 years; only seating had been reduced to 978.

In 1986, 1997 and 1999 there was an upgrade of the speaker system, the last one adding surround sound and DTS, earning the Cathay an official ‘four star’ cinema status.

A remarkable oddity of the Cathay is the entrance opening to the center of the intersection of Huai Hai Lu and Mao Ming Lu – it made some headlines in architectural magazines of the thirties. Maybe this contributed to its municipal preservation status in the early nineties – which apparently only applied to the outside of the building, as its protected status did not prevent the splitting of the screening hall: The original one was cut into three smaller rooms, which reopened on June 28, 2005, with 225, 236 and 123 seats. The new floor plans look quite unattractive, with long and narrow screening tubes. No trace of the original decoration remains visible.