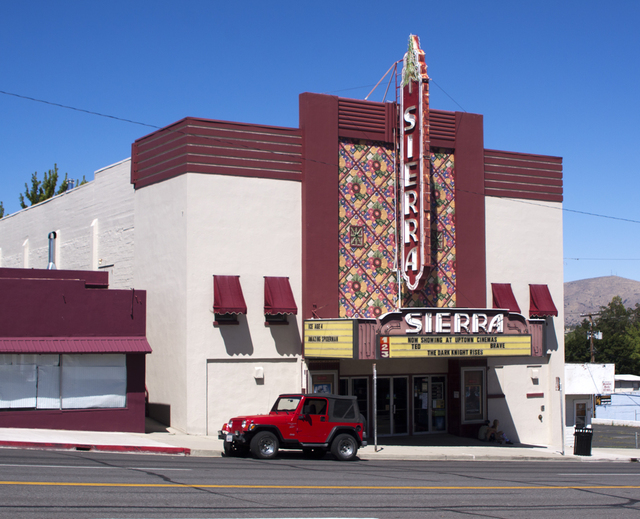 The Sierra Theatre in Susanville, CA was opened March 15, 1935. This theatre is listed as open today.

I worked as a part time projectionist at the Sierra from 1956 through the early 60s (also the Lassen Auto Movie). The first movie I remember running by myself was the Elvis Presley film, “Love Me Tender.” The Sierra used Super Simplex projectors, Simplex XL soundheads and Peerless Magnarc lamps. The sound amp was Western Electric. The original projectors were moved to the drive-in in the early 50s when the Sierra was equipped to show 3D movies. I think the Sierra was owned by United California Theatres at this time.

There is a documentary running on PBS this week called “P.O.V. Prison Town USA” and there are several shots of this Main Sreet mainstay, with its vertical sign and yellow marquee, in plain view. I was happily surprised to find that such a seemingly depressed location is able to support this theater. (There is another theatre in town, the Uptown, but I didn’t notice if it too was shown.)

This link at the first comment still works; check it out for all things Susanville.

Following up on Joe Vogel’s comment of 12/28/05, here is another photo of the Orpheum in Susanville. We can’t establish that it actually was used as a theater, so I won’t add it. Apologies for detracting from the Sierra page:
http://tinyurl.com/2nhvyp

ken mc: You can add the Orpheum. Here’s a brief item from the July 16, 1949, issue of Boxoffice: “Susanville, Calif.— Work has been resumed on rebuilding the old Orpheum. Owned by T&D, the project was halted by the extreme cold last winter. The circuit also owns and operates the Sierra Theatre here.”

I guess it was a theater before it became a bowling alley. From the second photo you linked to, it looks as though it might have been a lodge hall of some sort first. In any case, the style of the building suggest an origin in the 19th century.

The March 23, 1935, issue of Motion Picture Herald said that the new Sierra Theatre in Susanville would soon be opened. The May, 1934, issue of The Architect & Engineer ran this brief item about two proposed theaters in Northern California:

The theater to be built in Redding must have been the Cascade. As both theaters were being built for the same company, and the Cascade was designed by San Francisco architect J. Lloyd Conrich, it seems likely that Conrich would have designed the Sierra Theatre as well. A 2001 post by Warren E. Bechtolt on this message board says: “Research from AIA lists over 190 projects designed by Conrich, 31 of which are theatres.” It does seem very likely that the Sierra would be among them.

Engineer Leon Hagop Nishkian had a long career which included working as the structural engineer on a number of notable theaters, including the Fox, Loew’s Warfield, Orpheum (both the O'Farrell Street and Market Street locations), and Castro Theatres in San Francisco, and the Paramount in Oakland. He began his career in the office of San Francisco theater architect G. Albert Landsburgh in 1906, and in 1919 he founded an engineering firm that is still in operation today. The Nishkian Companies web site provides this biography of its founder.

After several trips thru here on the way to Lake Tahoe, I finally got a chance to see inside. This is a wonderful renovated theater. I saw Maze Runner upstairs. Comfortable chairs and the view was pretty good, compared to other splits I’ve seen. Snack bar prices are reasonable and they refilled my water bottle because the fountain wasn’t working. I would come back here given the chance.