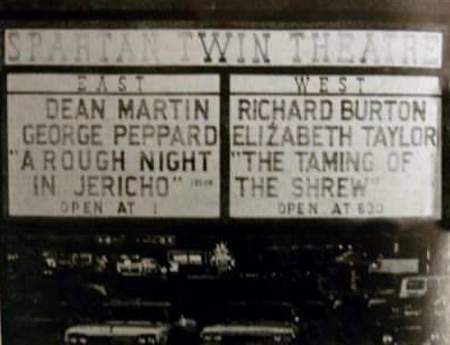 The Spartan Twin Theatre (named for the Michigan State University Spartans) opened October 11, 1967 with Dean Martin in “A Rough Night in Jericho” & Richard Burton in “The Taming of the Shrew”. It was located in the Frandor Shopping Center, not far from the west edge of the MSU campus.

The original two auditoriums (Spartan Twin East & Spartan Twin West) were simply decorated in a contemporary style with large screens. The signs posted during construction indicated that the theatre was going to be operated by Fox Eastern Theatres, but it opened as a National General Theatres operation. Later, management passed to the Mann Theatres chain and finally to UA.

At its opening, it was a state-of the-art house and may have had 70mm capability; films such as “Patton”, “2001”, and “Brainstorm” played there.

One of the auditoriums was halved in the 1980’s. During that decade the theatre lost its allure concurrent with the growing shabbiness of the Frandor Shopping Center as a retail center. In addition, the same forces that led to the closure of the theatres in downtown Lansing and East Lansing, especially the growth of muliplexes in the malls east and west of Lansing coupled with the many films available to MSU students and staff on the campus, undoubtedly led to its closure in February 1994.

After closing as a theatre, the building was converted to a commercial children’s playspace. It was then razed and a chain drugstore occupies the location now.

The theater was designed by Drew Eberson.

This theater should be identified as the Spartan 3, as it was a triplex in its last years, with Spartan Twin as an aka.

The exact opening date for the Spartan Twin was October 11, 1967, according to an item in Boxoffice of October 30. Operator Fox Eastern Theatres was a subsidiary of National General Corporation. The Spartan East originally seated 1,000, and the Spartan West 650.

The larger auditorium was slated to show first-run fare, opening with “A Rough Night in Jericho,” while the smaller Spartan West would be used for road shows, and opened with “The Taming of the Shrew.” The star-studded opening of the Spartan Twin was studded solely by actor Chill Wills. There’s no word on whether Lansing has yet recovered from the excitement. Chill Wills survived for another eleven years.

I recall watching the re-release of “2001: A Space Odyssey” in Dolby stereo in the Fall of 1974 alone in the middle of the massive theater. The sound filled the room, complete with golden drapes, and I was totally immersed in this classic. The film had been re-marketed under the advertising tag line, “For the Ultimate Vacation, Take the Ultimate Trip” It was a sly appeal to students who would ‘get high’ to watch the final 20 minute light show at the end of the film. I had never seen it before, and it really made a big impression on me. I remember it to this day.

Grand opening ad in the photo section. Chill Willis opened many theatres for NGC in the USA and Canada. It was constructed during NGC’s building binge of 1967 going as far as Montreal.