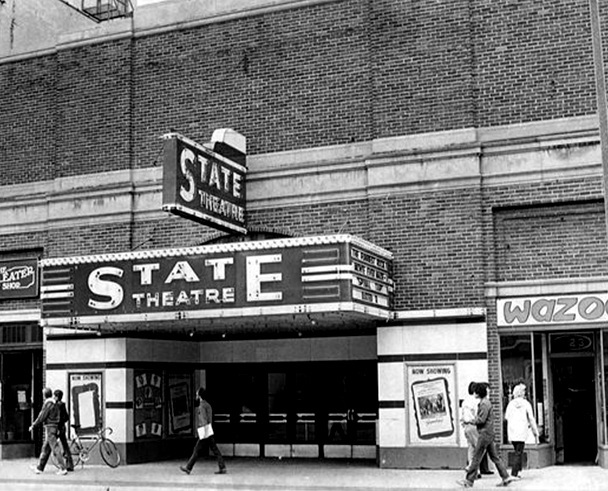 The State Theatre was opened November 3, 1927. For a theatre built at that time, the State Theatre in East Lansing had little to offer in the way of opulence or elegance, but may have given some idea of what life was like in East Lansing in the era before Michigan State Colllege became mammoth Michigan State University. It was a fixture on Abbott Road very near its intersection with Grand River Avenue for many decades.

It was, like so many theatres in Michigan cities outside of Detroit, a part of the W.S. Butterfield circuit right up to its closure and demolition.

When I was a student at MSU in the late-1960’s and early-1970s, it was regarded as the art theatre for the greater Lansing area, but it was evident during my visits to the campus as an alumnus that its programming had switched to mainstream fare by the mid-1970’s. The last film I recall seeing there was “Saturday Night Fever”.

It had a very small lobby; as I recall, its auditorium was painted primarily an odd shade of green with some very old stenciled decoration with two blocks of (rather uncomfortable)seats separated by a center aisle. I doubt if the theatre ever had any sort of remodeling or makeover in its history. Although it had a stage, one could easily imagine watching a 1930’s-era black and white film there, projected onto a picture sheet with the dimensions of the Academy frame.

In its last years, the theatre became very run down on the inside; colleagues of mine who lived in the area stopped going there especially after an incident involving falling plaster and occasional mice sightings. It finally closed and was demolished in August/September 1985; little or no effort was made to save or preserve it. A bank parking lot now occupies the space.

Can’t believe this one in the Lansing area is gone, too!

The newspaper article with b/w photo is so sad especially the words of Jim Fritzgerald, bank president…..“few have protested the loss of the old building”. If I were a resident of Lansing and Mr. Fritzgerald is still alive, I’d want to go meet with him and ‘chat’ about the theatre his bank owned and chose to demolish!

When I was an MSU student in the 1950s, the State would show wide-screen movies by squishing down the top and keeping the sides the same. We would term it “drawf-a-scope.”

Lost your new links from American Classic Images are broken.

Thanks for the info.

November 2nd, 1927 grand opening ad in the photo section. It opened on the next date.

This web page has a history of the State Theatre. Construction began in late 1926 and was completed in 1927. The theater and the adjoining Abbott Building were designed by Edwyn Alfred Bowd and Orlie J. Munson of the Lansing architectural firm the Bowd-Munson Company. The Abbott Building survived the theater by more than three decades, finally being demolished in October, 2017, after having been vacant for about ten years.