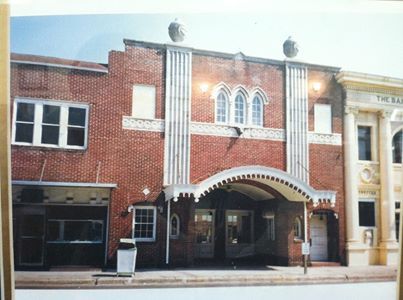 I have very limited knowledge of this theatre but wish to get it listed so that others might contribute additional knowledge. The theatre was built around 1928 and was designed by Valdosta architect Lloyd Greer for Interstate Enterprises, owned by the Young Estate. The theatre was erected adjacent to the Bank of Quitman and featured many architectural ideas that later materialized in Greer’s design for the Moultrie Theatre in Moultrie, GA, in 1929.

The Ilex Theatre (named for a cattle species raised in South Georgia) featured two urns resting upon two almost moderne pilasters that ran the height of the building. Where Greer used a large Palladian window on the third story of the Moultrie, he placed three smaller windows with Neo-Gothic headers as a design feature on the second story of this much smaller theatre.

The marquee of the Ilex Theatre was never modernized and, in its original format, resembled the front of a much earlier nickleodeon with its arched canopy and Gothic denticulation on the underside. A large and well-executed head of a stylized Ilex bull was used for the central support chain of the marquee.

A stone course of what appeared to be intertwined reels of film separated the two levels of the theatre on the facade.

The theatre was demolished sometime after June, 1971 (when I photographed the then-closed house).

Maybe John Clark McCall needs to dig up that 1971 photo he took!

My information came solely from this website and Google Maps. I’d never been to Quitman before the day I took that picture.

Major, my comments were directed at the last line in the introduction at the top of the page. The one that says a photo was taken before it was demolished.

The description in the intro sounds nothing like this theater. Next to the Quitman Bank, gothic architecture, three small windows, fancy stone facade…. My money says the building pictured is actually the Star like WillieP says in his post.

I have the photo of the Ilex taken in 1971 but, as you know, Cinema Treasures will not accept a downloaded photo. The pictures taken of the present “Tony’s Garage” are defnitely of the former Star Theatre or some other theatre; NOT the Ilex.

Click on my name, and send me the photo to my contact information e-mail address. I can then put it up on a hosting service so the photo can be online. If you want to that is…

This is NOT the Ilex…This is the Star theatre. The Ilex was as SiliconSam decribed. On Lee Street next to the Bank of Quitman. It had a stone facade with the head of an Ilex bull holding up the marque…I would like to see that photo taken down. It is NOT, I repeat NOT the Ilex. I was born in 1951 and attended this theatre all my life. I will see what I can do to get an accurate photo available. You may contact the Brooks County Cultural Center and Museum for a photo I’m quite sure. I will try to contact them as well, but you may get quicker service if they think it will be posted online. Again, the photo you have is of the Star NOT the Ilex. The Ilex was quite flashy. I see where theatrorganmana told you over 2 years ago this is not the Ilex and that he has a photo…what gives. If I can’t download a photo it will do me no good to find it. Please straighten this out…it’s ridiculous to have this photo on your site and call it the Ilex.

Status should be closed not demolished!!!!!

No, 3Gary3 the Ilex was demolished. The Star building is still standing I’m pretty sure…There is no more Ilex it was demolished long ago…provided the drive thru lane for the Bank of Quitman next door, which is now closed. The photo is NOT of the Ilex Theatre…read my post.

The comments state that a picture was posted, but I cannot link on to one. Can someone who has a photo of the Star and/or Ilex please post it?