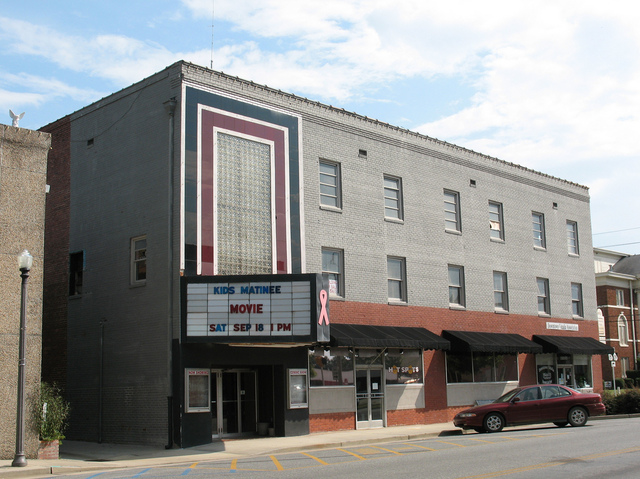 The Pal Theatre opened in 1928. It was operated by Brice Enterprises during the time I was growing up in my birthplace, Vidalia, Ga. (1949-1960). During this time, Baron Godbee was the manager and I well remember being sent home on several Saturdays after Mr. Godbee stopped the movie and scolded us for being so unruly at the matinee.

I enjoyed getting an end seat with a seat standard that was lit so that I could tell what flavor of Charms I was eating.

The Pal Theatre showed first-run films during my childhood there. I saw Hitchcock’s “Vertigo” there and haven’t been exactly right since.

I had an early passion for theatre organs and didn’t find out until many years later–after I had left Vidalia–that the Pal Theatre actually had a theatre organ–a Page, installed in 1928!

I fondly remember the “Iron Claw” serials on Saturday, and also watching Mr. Brice come in to town from his estate in a big, black 1958 Lincoln Continental Mark III. Mr. Brice not only owned the Pal Theatre, but Brice Banking Company next door. He was Vidalia’s legendary wealthy man and saw to it that the Pal Theatre was well managed, stocked with good films, and was clean and sanitary.

I hope others can add more architectural and historical information about the theatre using this posting as a springboard.

In further research in “The Vidalia Advance” I have discovered that the noted theatre architect, Roy Benjamin was contracted to design the Pal, touted as “Vidalia’s Theatre Beautiful”. This was announced in “The Advance” on September 15, 1927, and the Pal opened on March 26, 1928 featuring Sam Lucas at the Page organ. The Pal’s first manager was Hal H. Macon and the house organist was Lottie Belle Lee.

Mr. Lucas' program at the Pal featured “A Trip Through the Golden Voiced Pipe Organ”. This must have been an abbreviated journey as the Page organ was a very small instrument.

According to Bowers' “Encyclopedia” page 551, there was a “Colonial” theatre in Vidalia equipped with a Reproduco organ made by the Operators Piano Co. I could not find a page for the Colonial, so I am putting this here for the time being.

I seen it right across from my bank BB&T and now it’s closed for good. No, wait. That’s Sweet Onion Cinemas 4 and Lost Memory, I add it for you and put in the info.

Most if not all the PAL theatres were in South Georgia.

The Pal Theatre web site is now at this URL, but it looks like hasn’t been updated for at least a few months, and possibly for more than a year. The “Upcoming Events” section has dates listed for October, November and December, but no year listed, so they could be from 2011 or even 2010. It doesn’t list any movies at all.

It also gives different telephone numbers from the one listed in our “phone numbers” field above, but I haven’t called them as it would be a long distance call for me. Maybe someone local (or with Internet phone service) could check them to see if the numbers are even connected. The theater might have shut down.

Probably another operation hanging by a thread, then. I hope they manage to find a ladder.

I’ve also come across references to a Brice Cinema (presumably owned by the same Mr. Brice who owned the Pal) at 1101 E. First Street in Vidalia, but I haven’t found out any details except that it’s closed, and that the building was renovated in 1969 with plans by Savannah architect Allan H. Eitel. It’s unclear if it was already a theater that was renovated, or an existing building with some other use that was converted into a theater.

Apparently the Sweet Onion Cinemas (which has instantly become one of my favorite theater names ever), with five screens, is the only movie theater now operating in Vidalia.

Yeah, Chuck and Joe sometimes small time operators really clam up when you visit or call, other times they will talk and talk,Onions are the main deal there, not movies.

I am the current owner (since 2004) of The PAL Theatre in Vidalia. We’ve been closed off an on for a number of years now, trying to find our niche. With digital projection sneaking up on us, it will be necessary to make some changes yet again. We’ve recently added a second concession area with different level of service and food as well as wine and beer. We are expecting to open in a few weeks. Our website (upon completion) will be www.mypaltheater.com and our business office phone number is 912.538.1700. Please ask for me, Ann, when you call and I’ll be glad to answer any questions you may have.

Because our theater served as the business offices and supply station for all of the 18 theaters, we’ve found quite a bit of movie theater memorabilia that will be displayed in the theater. We look forward to seeing you!

Hi all I work in Vidalia for 6 years and went to this theater from time to time. It was a nice theater

Many memories of the theatre growing up in Vidalia. I can remember it was 10 cents to get in on Wednesday’s, I can remember all of the Elvis Presley movies when people would get up and dance (twist) to his songs. Sitting up in the balcony and throwing popcorn at the people below. All of the Tarzan movies and etc. When I was a kid, I would usually meet Mitchell Brice (owners son) there and we would make a day of it there……at the 5 & 10 store next door and the rest to the town area. I did not keep in touch with Mitchell through the years, but I understand he has passed away. I moved from there when I was about 10 years old, all good memories. Mitchell was a good friend back then. May God rest his soul.