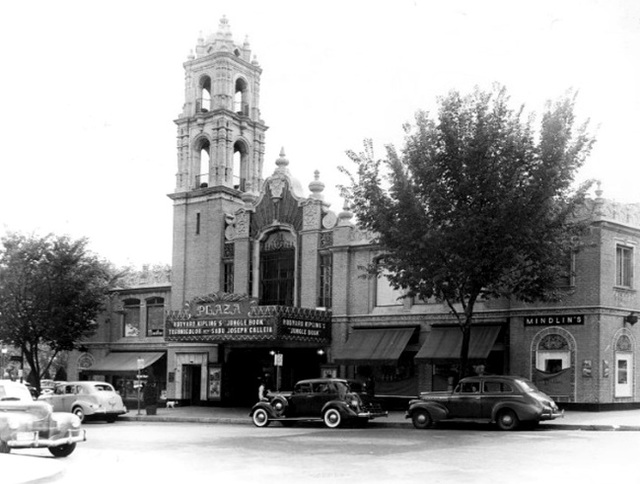 The Plaza Theater opened on October 9, 1928 with Janet Gaynor in “Street Angel”. It helped solidify the elite ambience of the emerging Country Club Plaza. The theater added to the Spanish motif of the Plaza’s architecture, and altered patrons' perceptions of the area from a glamorous shopping area to more of an entertainment destination.

The theater’s 72-foot tower ensured its prominence as a Country Club Plaza landmark for many years. The most remarkable feature of the theater was its decor. Country Club Plaza developer J. C. Nichols and architect Edward Tanner went to great lengths to faithfully recreate the atmosphere of a Spanish villa. The theater lobby, for instance, was designed to mimic an inner court, with a red tile floor highlighted with glazed tiles depicting Spanish military figures. The Plaza Theater was primarily a movie house and was owned by an incarnation of the Fox Company from 1931 through the 1960’s.

The space also played a role in the Nichols Company’s ongoing desire to impart culture on visitors to the Country Club Plaza. Beginning in 1951, the Kansas City Music Club sponsored the Thursday Morning Series of lectures and musical performances held at the theater. The list of names of series participants is quite impressive: Charles Laughton; Agnes Moorehead; Jessica Tandy; Hugh Cronyn; Claude Rains; Edward R. Murrow; and many others. Proceeds from the series went to fund club activities.

In 1961, the theater was remodeled to accomodate the Kansas City Philharmonic Orchestra, which performed there for several years. In the early-1980’s, the main theater auditorium was divided into two parts, the balcony enclosed, and a screen installed on the upper level. In December 1983 the balcony was split into two screens. This multi-screen format lasted for several years, but competition from suburban complexes and a 15-screen multiplex at the western edge of the shopping district spelled the end for the Plaza Theater.

On April 4, 1999, Dickinson Theatres closed the theater. Restoration Hardware, a national chain of hardware and decorating stores, remodeled the theater and moved into the space in fall of 1999. They had vacated the building by summer of 2017.

Hey KCB3. I hope that that comes to fruition.

Not related to the history of the theater itself, but I believe the space is now empty. Restoration Hardware is no longer there.

Last Christmas, I was back in Kansas City and had noted previously that Restoration Hardware had left. I did not know they were going next door in space from the old Halls Store. So what is going on with the Plaza Theater Building? The actual ceiling was never destroyed and only a front portion of the balcony was removed.Come on UMKC restore the Plaza Theater as a Live Performing Arts Center. If not the Plaza – how about the old Lyric (Capri) Theater.

October 9th, 1928 grand opening ad in the photo section. It was “The Show Place of Mid-America”

I thought when they carved up the theatre, there were 3 screens. One in the balcony and two on the first floor. Can anyone comment on that?

Yes, the theater ended with 3 screens. Mann added the second screen on October 22, 1976, reopening with ‘Marathon Man’ and ‘The Ritz’. After Dickinson took over from Mann, they split the balcony and it became a tri-plex, reopening on December 9, 1983 with ‘Sudden Impact,’ ‘Yentl,’ and ‘To Be or Not to Be (on 12/16). I remember seeing 'Yentl’ after the remodel and it was a very nice theater. They had added Dolby Stereo to the main floor and the ‘Yentl’ balcony theater. The third theater had no stereo sound. I’m pretty sure the main theater never had any alterations other than the addition of Dolby Stereo. The Plaza was always so much nicer than the tiny, awful basement screens at the Seville 4 down the street. It’s a shame to see it sit vacant.

I quite agree with you, Sunflower. 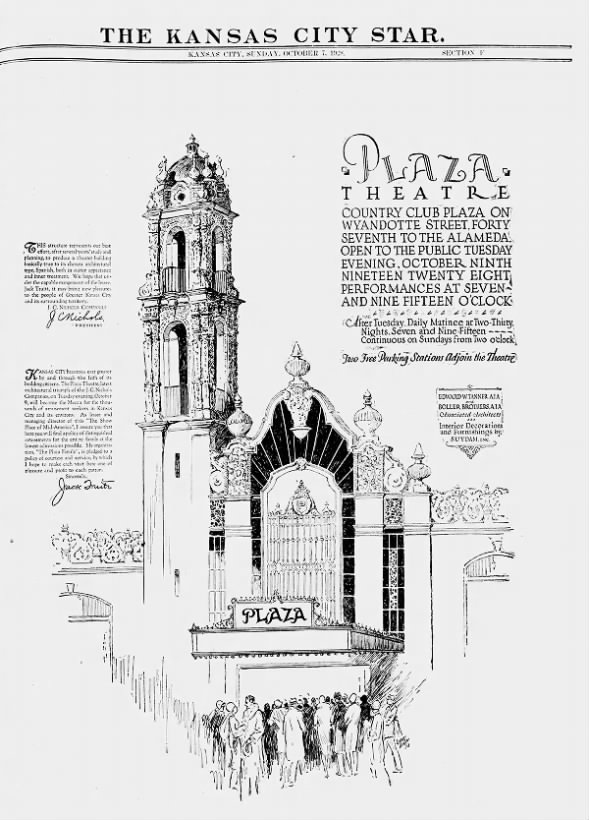 There seems to be a growing concern about no theaters operating on The Plaza. Many people have been angry ever since the Plaza was closed and converted to a short lived Restoration Hardware Store and then a knock off version. The ugly dark grey that replaced the white paint is dark and horrible for any retail situation. Many of us want the Plaza restored and returned as a Live Performing Arts Theater with ability to also show special movies. Although a removable flore was built along with a drop ceiling in the main auditorium to be the back room storage for the retail, much of the original decor is still there but hidden. Part of the old Balcony had to be modified to allow for the new restrooms to be built. All in all, we want the Plaza Theater back. It was not so altered that it could not be restored. Sadly the beautiful steps going up to the Balcony were removed along with covering the ornate steps going downstairs to the Lounge and Restrooms - Much of the Balcony is still the same and some have said the seats were never removed. The beautiful Spanish Style ceiling is still there, but would need a lot of repair due to the placement of new heating and AC in the building along with the dropped ceiling in the stock warehouse. Got to get more people behind this especially the Arts Community. Not sure what is happening with the Palace Theater main building. What are the plans for that? If we can get pride back at the Plaza with it being a safe place for night life, we need the Theaters back especially The once majestic Plaza. Anyone else the feels the same way, please comment.