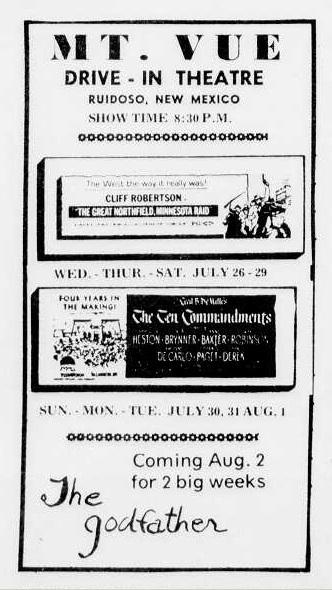 The Sierra Cinema now occupies the land where the Mt. View Drive-In once stood.

Boxoffice, May 18, 1959: RUIDOSA (sic), N. M. – A drive-in that will accommodate around 200 cars is being rushed to completion for a June 1 opening by Ken Newton and Ed Wimberly, owners and operators of the Mountain-Vue Sho-Dyn Drive-In."

With the following ad, the Mt. Vue added the “Sho-Dyn” to its weekly Ruidoso News ad.

1) With the chef image, the drive-in was probably trying to position its concession stand as a standalone, or at least featured, dining establishment. The Sho-Dyn stayed in its ads through 1960.

2) I’ve looked through dozens of this drive-in’s ads in the News, but I’ve never seen “Mountain” or “View” in any of them. Although industry publications stated its name in full English, I’m included to call this drive-in the “Mt. Vue” as it apparently wanted to be known.