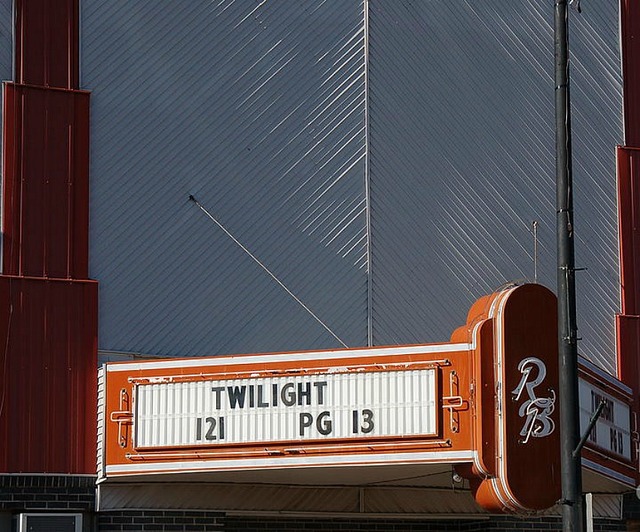 It was renovated, reopening on December 31, 1991 with a community concert event. On January 18, 1992 movies returned when it screened the animated movie “An American Tale-Fievel Goes West”. On September 23, 2012 a fire in the projection booth caused smoke damage inside and the theatre was closed for 7-weeks.

This theatre is managed by the Rosebowl Theatre Board that consists of all volunteers. Movies are shown four times a week, Saturday at 8:00 pm, Sunday at 5:00 and 8:00 pm, and Monday at 8:00 pm.

This theatre does no marketing of any kind such as showtimes online, an facebook page etc, which leads me that is this theatre is not open on a regular basis. If this theatre is open, where is the online proof?

Apparently some people can’t pick up a phone and check showtimes. The movies are up to date and very current. There are only a couple weekends a year that this theater is not open due to other events like the county fair. Otherwise it is open every weekend. Showtimes below the picture are all correct. Need to find out movie info 308.425.3313

The Franklin Opera House launched with a live play on October 18, 1909. The venue experimented with movies over the next ten years. It switched to full-time movies when a new operator rebranded it as the Pastime Theatre launching there on July 2, 1918 with the World War I propogandastic feature, “The Beast of Berlin.” Burton Flower Shop owner Harold Daddow reopened the venue changing its name to the Rex Theatre beginning on September 2, 1921 with D.W. Griffith’s “Love Flower” on a four-day a week movie policy.

Daddow sold the venue to Harold Gould who continued it as the Rex. The theatre closed briefly for a remodeling in January of 21, 1927 following showings of “Laddie.” New owner George E. Hall - and future Franklin, Nebraska Mayor - relaunched it as the Rialto Theatre on February 10, 1927 with Harold Lloyd in “For Heaven’s Sake.” Hall would operate the nearby Bloomington Picture Show Theatre just five miles away in the town’s opera house.

In 1929, likely due to the end of a 20-year leasing period, Hall moved the venue adding sound to the Rialto to stay viable and closed the Bloomington operation as well as the Franklin former Opera House venue. Three years later, Hall then remodeled the former Opera House/Rex/Rialto venue moving the local movie house back to its previous location on December 29, 1932 and renaming it as the RoseBowl Theatre. (The newspaper listings often added a space to the name but it was the “spaceless” RoseBowl Theatre for reasons unknown.) Hall added widescreen projection for the presentation of CinemaScope films beginning March 4, 1954 with “Mister Roberts.”

On September 28, 1990, Al & Val Smith and Steve Siel donated the RoseBowl venue to the Franklin Chamber of Commerce. It was reopened as the RoseBowl Playhouse & Theatre on January 18, 1992 with the film, “An American Tale: Fievel Goes West”. Fire in September of 2012 ended film projection but not the theater. The RoseBowl converted to digital projection thanks, in part, to donations in 2012 at its refurbishing. It was still working in the 2020s through the assistance of dedicated volunteers four days a week. Its name has become the Rosebowl Movie Theatre (still no spaces) losing its capital “B” (though still reflected with the RB on the marquee).