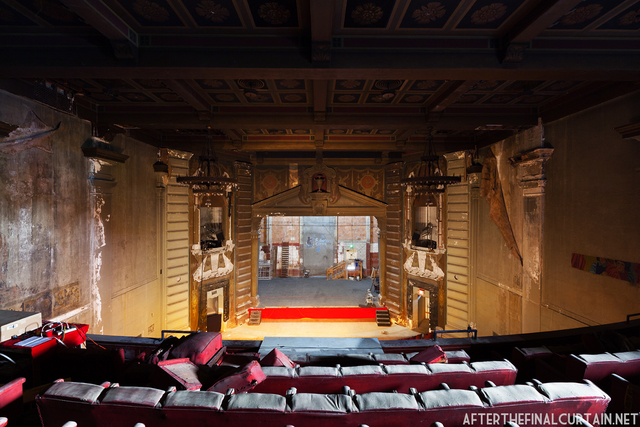 Opened as Chapman’s Aician Court Theatre on May 28, 1925. The opening film was Tom Mix in “Dick Turpin”. The theatre had 1,095 seats in orchestra and balcony levels, and was equipped with a Marr & Colton 3 manual 16 ranks theatre organ. Its architect was Raymond Kennedy, of the firm of Meyer and Holler, who also designed Grauman’s Chinese Theatre and Grauman’s Egyptian Theatre, both in Hollywood. The theatre was designed with a California Gold Rush theme and included several impressive murals by Anthony Heinsbergen and John Beckman. There is also sculpture throughout the theatre, and its proscenium arch (still very intact today) feature unusual tapered and squared columns called herms. In early-1929 it screened its first ‘talkie’ “Give and Take” starring Jean Hersholt and George Sydney.

By 1950 it was operated by Cabart Theaters Corp. In the mid-1950’s, the theatre was ‘modernized’ during a remodeling that obscured the theatre’s original murals and other features.

The theatre was in danger of being demolished for five-story apartments, but a non profit group, the Fullerton Historic Theatre Foundation, fought a long battle, and raised enough money to purchase the building to use it as a a multi-use entertainment venue featuring independent and classic films as well as performing arts. Work began on the restoration project in the summer of 2005. It was announced in November 2021 that restoration work is planned to be completed in 2025, to tie in with the 100th Anniversary of the opening of the theatre.

Here is a February 2008 article about renovation:
http://tinyurl.com/5gpott

According to 1925 L.A. Times advertisements, the theatre’s opening week included the following features:
Tom Mix in “Dick Turpin"
Dorothy Devore in "The Narrow Street"
Rin Tin Tin in "Tracked In The Snow Country”

The grand opening announcement lists 5/28/25 as the opening night and mentions that the Fullerton branch of Mary Louise’s Cafe & Tea Room of Los Angeles was the property’s secondary tenant.

I started going to the Fox when the La Habra Theatre closed in 1954 or early 1955. My favorite memory was going with my father to see “The Hustler” and sitting in the huge loge seats in the balcony. The biggest loges, all formal wood and red leather, as I recall, and I thought they must have been stolen from William Randolph Hearst at San Simeon.

A September 2009 photo of the Fox I took:
View link

The Fox Fullerton has been very important in my life. I grew up there. I started going there as a boy. There was Saturday Crazy Races and Sunday Matinees. As I grew older, I went on Friday nights. It was a good place to meet girls. Saturday night became date night. There was always a double feature and cartoon. Maybe even a newsreel. I spent some weekends pulling weeds out in the back of the theater or cleaning the basement for a minimum wage. When I was older I became an usher and doorman. During one three week period in the summer my brother and I were hired as custodians there so the regular custodian could go on vacation. We worked from the end of the last showing every day to 8:00AM the next morning. You see, my father was the manager there during this time. My favorite times were as a boy when my brother and I would accompany my father to work during the week when the theater was empty and no movies were being shown. We explored every nook and cranny from the attic to the basement. Here’s one for Fox Fullerton fans. Do you know where the fountain was? I did and I knew how to turn it on. I also knew how to sneak into the projection room through the roof.

Along with celebrating the theatre’s 85th anniversary this month, it was announced that phase one of the site’s renovation will begin in the Fall of 2010. Apparently, this first phase will primarily focus on the complex’s exterior and adjoining commercial units; the idea being that the commercial spaces can provide a steady income, once tenants are able to occupy them.

Today (5/31/11), they will begin removing the 50’s era marquee and box office as part of the ongoing renovation; thus, restoring the theatre’s original look.

I visited the Fox Theatre almost two years ago. Check out my post about the theater at After the Final Curtain