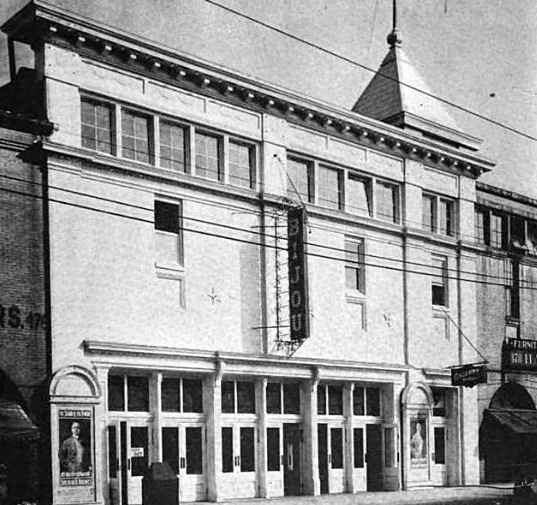 This theatre opened as the Auditorium (converted from a carriage/streetcar barn) in 1893 (the same year as the first Lyceum Theatre burned). It was renamed Bijou Theatre in 1903. It was primarily a legitimate theatre.

The building burned in 1911, and the Chisca Hotel still stands on the site, dating from 1913. Most theatres had film somewhere on the bill after 1910, but the Bijou Theatre’s main claim to cinema history is the first demonstration of the Cinematograph in 1896.

The Bijou was located at 275 South Main Street, Memphis, TN.

Recent acquisition is a playbill from Wells' Bijou, Memphis, Tennessee for the week beginning Monday October 8 1906. It lists the following performance:

The show was in two acts with a total of 14 songs in various combinations of solos, duets and choruses.

Following TOM DICK and HARRY was a musical programme with Paul Schneider listed as “leader.” (This is apparently an after piece.) There were six songs by different popular composers of the day including “The Governor’s Son Medley Selection” by G.M. Cohan.

Also listed in the program is this note: Evening performances at the Bijou Theater begin promptly at 8:15. The Matinees, Tuesdays, Thursdays and Saturdays begin at 2:15. The box office is open daily from 9:00 a.m. to 10:00 p.m.

The next show was to be Sidney Toler in the charming musical drama HOW BAXTER BUTTED IN.

The program is 16 pages long, every page – including front and back covers – is covered in advertising. The implication from the quality of the playbill and the size of the cast is that this is a busy legitimate theatre. Jake Wells had Bijou Theatres in several other cities, including Knoxville (q.v.)

My old friends and long-time theatre history fans know nothing of this hall. Again, the implication is that it must have be taken down a long long time ago.

Chuck and Jack – regarding the Bijou being a “negro” theatre: Memphis has long suffered from segregation. For much of the 20th century the area of downtown south of Beale catered to African Americans. A theatre at 275 South Main would be in the appropriate area to be listed as a “negro” theatre. (Just for reference, the Orpheum is at the southwest corner of Main and Beale, the address is 195-197 South Main).

I notice that on CT there is not a listing in Memphis for the Lyceum Theatre. I wonder if the theatre listed here as the Bijou might be the Lyceum renamed by Jake Wells for his performances.

The Lyceum was a large handsom hall, built as a legit house around 1893, to go into competition with the Grand Opera House. I believe the Lycem was torn down in the mid-to-late 1930’s.

I’ve never known the address of the Lyceum, but do remember that it was briefly leased by Loew’s (and was advertised as Loew’s Lyceum) as Loew’s prepared to build the two palatial theatres: Loew’s State and Loew’s Palace. (q.v.) That would have had the Loew’s Lyceum operating around 1918 – 1919.

With a long list of friends interested in Memphis theatre history I remain surprised that none have ever heard of this hall, especially considering its very prominent address and size.

The Lyceum sounds very familiar. I think that I ran across a reference to it while researching the files at the Memphis/Shelby County library. Was the Lyceum primarily used as a cinema or for live entertainment? As for the Loewâ€™s theatres in the Memphis area, the only two that I know of were the Palace on Union Avenue and the State/Metropolitan on South Main.
There was a theatre on North Main called either the Theatorium or the Majestic that was built around this same time period and accommodated around 500. Think this might be the place?

vastor: the link to Memphis Tech High doesn’t seem to work. Can you check the address?

This web page (which I think might be the one vastor linked to, but the URL has apparently been changed, and the Mystery photo he mentioned is now at the bottom of the page) says that there were two theaters in Memphis called the Bijou, and neither one was at 275 S. Main (the Bijou is the second theater listed on the page, so is very near the top.)

The first Bijou (the one in the photo currently heading this page) was listed as the Auditorium, at 272-282 S. Main, in directories starting in 1894, and is listed as the Bijou, SE corner of Linden and Main in directories from 1904 to 1911, when the building burned down. (The destruction of the Bijou by fire is also mentioned in a 1912 book called Standard History of Memphis, Tennessee From a Study of the Original Sources, edited by Judge J. P, Young.)

The second Bijou was listed at 146 S. Main only in a 1922 directory, but the web page says it was opened about 1918 and closed around 1940. This might have been the house that Chuck found listed as a “Negro Theatre.” However, I found a list of theater fires in 1913 compiled by the journal Safety Engineering, and it listed a fire at the Bijou Theatre in Memphis on June 4 that year. Possibly the second Bijou opened before 1918, or perhaps the house that opened around 1918 was the third of the name.

On June 8, 9, and 10, 1909, an organization called United Confederate Veterans held its nineteenth annual meeting and reunion at the Bijou Theatre in Memphis. The minutes were published in a book, which includes a small photo of the theater. A scan is available from Google Books at this link (you might have to scroll a bit to see the photo.) In this photo, the building next door to the right (south) displays the address 272, which is what makes me think the original Bijou was probably at 270 S. Main.

A photo of the Bijou which appears to be identical to the one currently at the top of this Cinema Treasures page was published in the April, 1906, issue of the Monthly Journal of the Brotherhood of Locomotive Engineers (Google Books scan here.) The adjacent text, which is about Hawaii, has nothing to do with the photo. Scroll up a bit in the scan to see a photo of the second Lyceum Theatre as well.

The March, 1906, issue of The Bridgemen’s Magazine published a brief item datelined Memphis saying: “The Wells Amusement Co. intends rebuilding the Bijou Theatre, at a cost of $125,000.” I don’t know if this was done or not. The front looks pretty much the same in the 1909 photo I linked to as it does in the photo published in April, 1906. Perhaps there was some reconstruction but it didn’t affect the facade.

The Bijou is listed in the 1906-07 edition of Julius Chan’s guide as having 2000 seats, so it was one of Memphis' major theaters. I’ve found no indication that it ever operated as a regular movie house, but the web page I linked to at the beginning of this comment said that, as the Auditorium, the house presented the first exhibit of the Cinematograph in Memphis in 1897.

The second Bijou may be seen next to the curved marquee photo on the Loew’s State page of CT. There is a large crowd on the street but it may not have anything to do with the theatre. 146 S. Main was just north of the State’s boxoffice.

Photo has been posted on this page as well.

The main cinematic claim to fame for this Bijou is that the Cinematograph was demonstrated in this theatre in 1896.