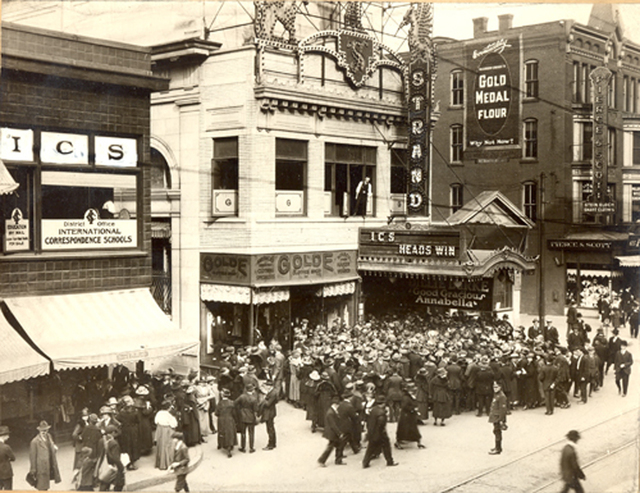 The Strand Theatre was opened on September 23, 1916 with E.H. Sothern in “The Chattel”. The lobby was a conversion of a former bank building. By 1941 it was operated by Paramount Pictures Inc. through their subsidiary Frank Walker.

I believe in its last days it was twinned, and closed in 1978. The building has most likely been demolished. It was on busy Spruce Street around the corner from the Comerford Theatre.

The Strand was designed by Robert W. Gibson, the architect of the Cartier building in New York, in 1901, as the Merchants' and Mechanics' Bank. The building was razed in the 1970s to make way for the modern Financial Federal Bank.

This was part of ABC Theaters of Pennsylvania in the early seventies.

I worked at the Strand theater part time as an usher in 1968 when I was in high school. I got 85 cents an hour and thought I was doing well because I was told one of the other theaters downtown paid it’s ushers 65 cents an hour.The manager’s name was Mr.Foley and the assistant manager’s name was Mr.Burney [sp?].When I first started working at the Strand there was a long run of “Gone With the Wind” I saw it so many times I had every line in the whole movie memorized.The ushers wore a red blazer jacket with a white shirt and black bow tie and black pannts and black shoes.There were 2 other theaters in downtown Scranton then, the Comerford and the Center. If we [the ushers] went to one of the other theaters and told them we worked at the Strand they would let us into see the movie for free, except one time they wouldn’t let me in the Center because you had to be 18 to see the movie and I was only 16. I left Scranton in 1969 and sometime in the late 70s or early 80s I went back to visit and went to to where the Strand had been and it was gone. There was a new, much smaller building in its place, I think it was a bank.

The October, 1916, issue of the Scranton Board of Trade Journal said that Michael Comerford’s Strand Theatre had been opened on September 23. Leon H. Lempert Jr. was the architect for the conversion of Robert W. Gibson’s 1901 Merchants and Mechanics Bank Building and an adjacent structure into a theater. Construction supervision was by local architect H. C. Rutherford.

The original bank’s interior was used as the lobby for the theater. The bank president’s office with lavish fireplace was used as the ladies lounge. The second floor housed Comerford’s poster & sign shop. A newer projection booth was constructed on the main floor in the fifties for 70mm projection.

This opened on September 23rd, 1916. Grand opening ad in the photo section.