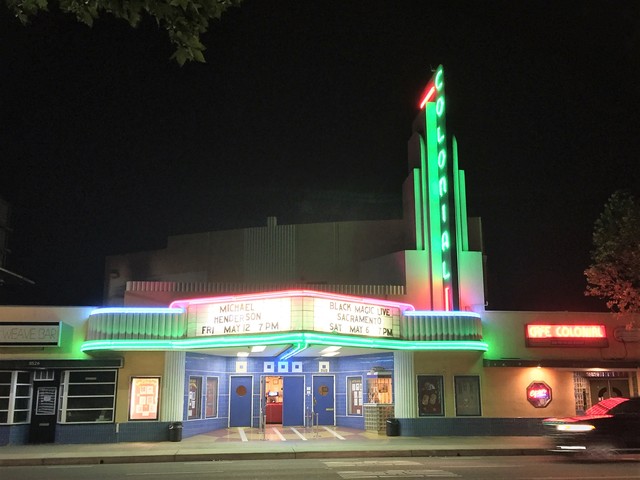 The Colonial Theatre was originally opened by Charles Holtz as a movie theatre on June 7, 1940 with Alan Marshall in “Married and in Love” & Lupe Valez in “Mexican Spitfire”. Recent attempts have been made to redevelop the neighborhood around the Colonial Theatre, which has been in somewhat of a decline, but there has been little success.

Today, it remains open and is used as a venue for live performances and film festivals.

The architect was Herbert E. Goodpastor. The contemporary report calls the building “a modern version of colonial style” but it looks like ordinary Art Moderne to me.

Opening date was June 7, 1940. Seating capacity was given as 856. The theatre was independently owned.

The Colonial was running softcore pin up nudie films in the mid 1960’s. I believe it was the first Sacramento theater to break the full frontal nudity barrier with these films. Softcore films of course later turned to hardcore as they did at almost all of the adult theaters in the country. I’d almost forgotten about this theater until I read that Sacramento theater (Crest, Guild) impresario Matias Bombal was programming classic movies again at the Colonial. That policy was unfortunately short lived, just as it was at the Guild. I believe that was sometime in the late 1990’s. It’s nice to know that at least the building still stands.

Here is another photo:
http://tinyurl.com/y98mguh

Does anybody know who owns the theatre today???

according to the website, functions should also include film festivals. The Rocky Horror Picture Show is presented on a regular basis.

The Colonial was purchased in 1972 or 73 by James Santillian Sr. & he owned it until his recent passing in January 2019 at the age of 88. It remains in the family, now his wife’s. His son, James Santillian Jr. has been running the business aspect of the theater (bookings, contracts, etc.) for at least the last ten years. The Sacramento Horror Film Festival holds events there several times a year, as well as TWF Wrestling. There are also concerts, live shows, independent films, and community events held there. It is available for booking and the restaurant next door will be reopening soon. The theater still retains a lot of its original charm and during the renovations done in the 90s, Charlie Holtz (who still lived nearby) was brought in to the project to provide details as only the original owner could. Working there is awesome, even with the ghosts that reside there. (A former projection manager has been known to continue doing “his job” {apparently just pacing} in the projection room. Must have REALLY loved that job to spend his afterlife still doing it haha) not to mention the interesting quirks inherent to a building that old.

1940 postcard for the Movie Club adjacent to the Colonial Theatre added. Today it is the Colonial Cafe. It is referenced in the other image in the gallery.