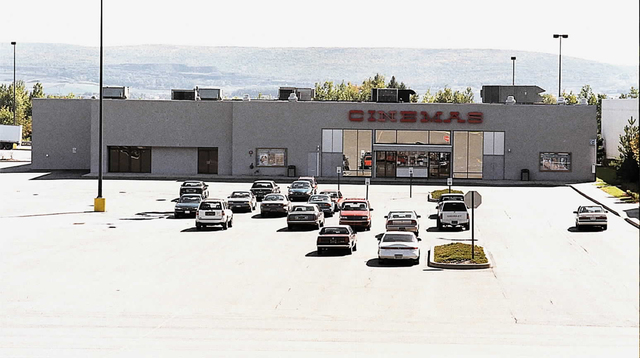 The Viewmont Mall Cinema was opened by General Cinema with three screens on October 31, 1973. Two more screens were added on June 29, 1979. It was closed and demolished in January 2000.

The Viewmont Mall Cenema was closed and demolished sometime between late 1999 and the early 2000’s (exact year unknown). A Borders Bookstore and parking lot are now on the site, along with the expansion of a department store. They closed not too long after the whole “Rated R ID checks” began. I remember visiting the theater with some friends who wanted to see the South Park movie. That was the first movie I ever snuck into, since I was under 17 at the time ;) It’s a shame the theater was demolished, there are so few places to see a movie in NEPA.

The General Cinema Corporation Viewmont Mall Cinemas was built as a tri-plex in 1973. It largely had very little competition, and did a high volume business. In these early years it was managed by Cliff Wolf. In 1978, General Cinema planned to expand the theatre into a five-plex, and brought in Fred Jensen, a former Division Manager for Sterling Theatres, who had recently joined General Cinema, to supervise the expansion. It was completed in 1979, and at the time, was one of only 13 five-plexes that General Cinema had. It was an extremely high volume unit, that typically grossed more than 2 Million Dollars a year. However, that changed in 1985 with an UA 8-plex that opened up a mile a way on Route 6. Business went down somewhat and GCC had discussed expanding it to 8 screens but that never materialized. Jensen left GCC in 1990 to accept an Administrative position with a hotel chain on the West Coast. Drew Taylor, a seasoned GCC Manager took the reins at this time, eventually becoming an Area Manager when GCC eliminated the Division Manager system. GCC had decided to move out of the Wilkes-Barre Scranton market around 2000, and Drew supervised the closing of Viewmont, as well as the Wyoming Valley 7-plex in nearby Wilkes-Barre, PA. It was demolished around the year 2000 and a Borders Book Store now stands on the spot. There were several Assistant Managers over the years, including, Frank Emmett, Bob Wheatley, Steve Grushinski, Dan Doherty, Rob Wnuk and Kathleen Rogers. None of them currently work for a theatre circuit, even though Emmett, Wheatley, Doherty and Rogers went on to manage GCC theatres in other locations.

I say, GCCDan, you forgot about me. Joseph Karl Bonitz was a manager at GCC Viewmont in the late 80s.

I apologize, Joe. I also forgot that Dan (last name I have forgotten) replaced Frank Emmett when he went to manage the Summit Park Twin at Niagra Falls in the fall of 1982.

As you may have figured out, this is Dan Doherty, and I have thought of you often and fondly over the years. I still occasionally see Mr. Bill, Steve, Rob (who is now married to the former Theresa Kiwior), Randy, Frank Leggat occasionally, even though I now live in Washington, DC, but still keep my property in Blakely, PA.

I’m not a big fan of mall cinemas, but this one was fun for a long time because it had a good bar/restaurant called Barrels almost next door, and you could go there before or after a movie. It closed in the 1980s.

Isn’t this really Dixon City PA? Ironic this closed, then the UA then the dollar quad now all thats left is the Circle Drive-In.

There is the Great Escape IMAX 14 now open in Dickson City, which I’ve been to several times and really enjoy. Link