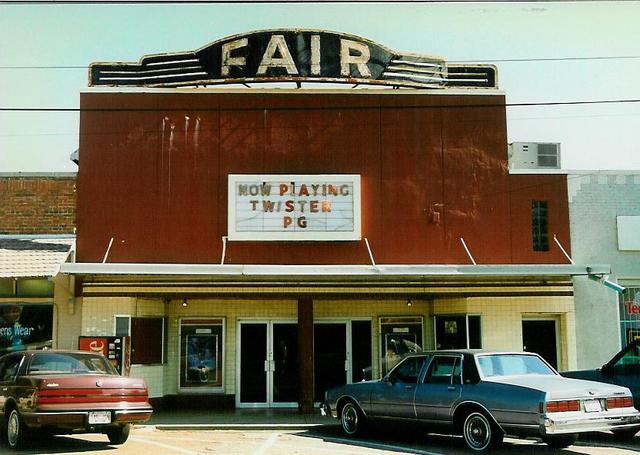 The Fair Theatre was built around 1935 and might have been part of the Martin chain (it looks like a Martin). The theatre closed in the 1990’s and became a gym for the YMCA. It was converted into a performing arts centre in 2005.

The Fair theatre has been transformed into a performing arts theatre. It has a new manager and many renovations have been done. Although the theatre is now mainly for plays, it will be showing movies from time to time. They played one not too long ago. The theatre has a lot of plays now. They also have sings. The theatre is really growing. The new manager has done a fine job with it.

The function should be changed from gym to live performance.

Here is some information about the performing arts center:
http://tinyurl.com/5ugcwd

The Fair Theatre was struggling along when we passed through in the summer of 1996:
View link

The July 4, 1953, issue of Boxoffice reported that the Fair Theatre had suffered a major fire. The rebuilding was protracted. The March 20, 1954, issue of Boxoffice said that rebuilding was continuing and Norman Fair expected to have the theater open late that month or in the first half of April, but the reopening was not announced in Boxoffice until their July 31 issue, so there might have been even more delays.