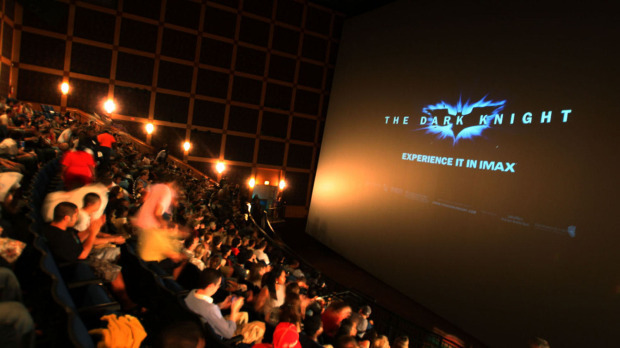 The Navy Pier IMAX Theatre was opened by Cineplex Odeon on September 1, 1995 screening “Africa:The Serengeti”. In 2016 it was taken over by AMC and following a refurbishment it reopened in 2017 with “It”. It was closed on March 17, 2020 due to the Covid-19 pandemic. It was announced on 30th March 2021 that the closure would be permanent.

Once upon a time, from 1996 until 2001, this Imax theatre had a wonderful little film series known as Late Night at the Max. It showed various films in either 35mm or 70mm. They ranged from TOP GUN to YOUNG FRANKENSTEIN. They even showed a beat-up old 35mm print of Dario Argento’s SUSPIRIA. For 2 or 3 weeks, they showed 2001: A SPACE ODYESSEY in 70mm. I could go on and on. Unfortunately, when Loews Cineplex decided not to renew their co-management agreement with Imax, they took the 35mm/70mm projection equipment with them. And, thus, Late Night at the Max ended. It really was a throwback to the good old days of big wide screen presentations in a downtown single-screen auditorium.

I remembered going to the Navy Pier IMAX to see Fantasia 2000 (2000) with my family to celebrate the new millennium, and Polar Express (December 2004) for a school field trip during my grade school days. I really want to go back there and see another good flick.

This opened on September 1st, 1995. Grand opening ad in the photo section.

They just reopened this week and now they have IMAX Laser. Sadly, they probably no longer have the 15/70 equipment anymore.

This theatre is now part of the AMC Theatres chain.

Unfortunately, it appears that their reopening may have been a little premature. It seems that the renovations were not actually finished on time, so they’re now projecting that they will reopen in the fall, at best.

Hopefully they will have kept their 15/70 projectors, and will be open for “The Last Jedi” in December. It would be a shame if the only true IMAX screen in Chicago missed out, even if it’s not a 15/70 presentation.

Was these place once used by the navy, hence the name Navy Pier?

It was opened in 1916 as the Chicago Municipal Pier. It was named Navy Pier in 1927 in honor of WWI Navy veterans. During WWII, the Navy used it as a training center.