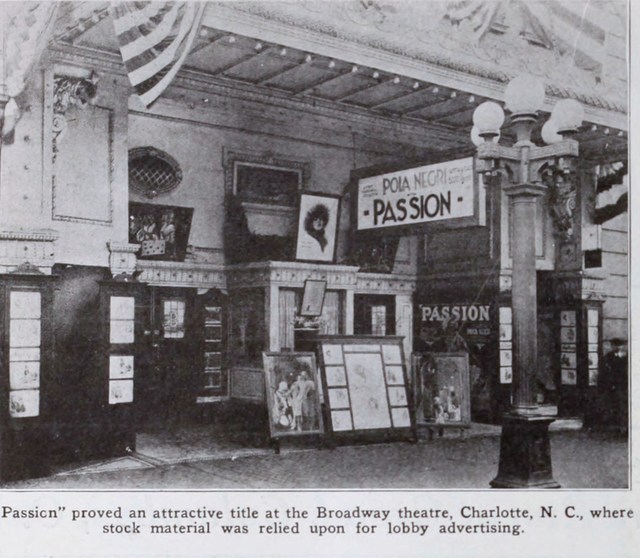 The Broadway Theatre opened on March 9, 1915 and was one of three ornate first run movie theaters in downtown Charlotte. It had a narrow auditorium with a balcony and had an ornate plaster dome from which hung a large crystal chandelier. When operated by Warner Bros. it was the first in town to install equipment for sound movies for a January 1927 run of “Don Juan”, and later that year an incredible seven week run of “The Jazz Singer”.

Operated in the 1940’s by Paramount Pictures Inc. through their subsidiary H.F. Kincey. Movies played until the mid-1950’s and their was a brief name change to the Fox Theatre but the theater closed and was razed in 1958. A large office building now stands in its place.

My brother was cast in a movie in Charlotte, NC, when he was in about 3rd grade. This would have been around 1944. He played the leader of a boys' gang. It showed at the Broadway Theatre. How can I find out the name of the movie and something about it?

The Broadway was a Warner Brothers house in the 20’s which explains the early conversion to sound movies. I found one report in the local media from the 50’s stating that it was the 5th theater in the country to put in the vitaphone sound system but I’m not sure how accurate that is – Charlotte was a very small market back then.

Their was an earlier theater in Charlotte called the Broadway that also showed movies. It stood at 15 W. Trade Street and operated in the teens and early 20’s.

The Broadway Theatre closed in June, 1952, and reopened as the Fox on March 6, 1953. The new operator was H.B. Meiselman, who ran a small regional circuit. The house was renovated and seating was reduced from 1,200 to 1000, according to a brief article in Boxoffice of March 14, 1953.

The June 26, 1926, issue of The Reel Journal said that H.L. Royster, managing director of Warner’s Broadway Theatre in Charlotte, was offering reserved seats for a 12-week summer season of movies and stage productions at the house. Royster said “…Charlotte citizens will be offered the best and latest New York musical comedy plays at the Broadway, starting Monday, June 7, with a change of program in both photoplays and stage plays on Mondays and Thursdays.”

To Beckymae, most likely this was the film always titled “The Kidnappers Foil” by Melton Barker Productions. See some good information at this web site: http://www.meltonbarker.com/index.html

Edward Marks was the assistant manager at The Broadway in 1947. I believe at that time it was operated/owned by Wilby-Kincey.

The Broadway also was known for its girlie stage shows or ‘Hootchi-Kootchi’ shows (did I spell that right – who even says “Hootchi-Kootchi” anymore???? Besides me, that is). 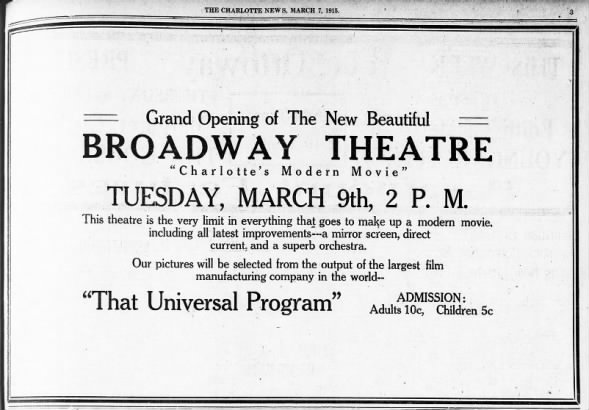 Several pictures and ads shown for this theatre are actually for the original Broadway Theater that stood at 15 West Trade street and operated from 1915 until the early 20’s. The Broadway Theatre at 209 S. Tryon was opened on March 16, 1925.