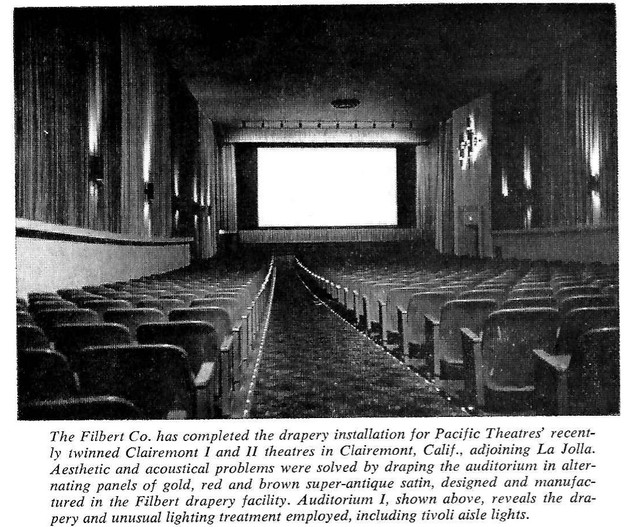 This theater is probably the one about which Boxoffice Magazine published an item in its issue of September 28, 1964. The item said that the Stanley Warner Management Company was planning a theater on a four acre site adjacent to the Clairemont Shopping Center in San Diego, and that groundbreaking would take place soon. The company was projecting an opening date of March, 1965, for the $1,000,000 project. It was to be a first-run house, equipped to handle all screen processes, and would be operated by the Stanley Warner Circuit.

I loved this theatre! I worked there from 1983-1987, but remember seeing “Willy Wonka & The Chocolate Factory” as a single screen feature when I was a youngun.

Working here was so much fun, even if the management was overwhelmingly too freakin' serious for their own good. The only thing that would’ve made this place better would’ve been if they used FRESH popcorn. Or um… if they used real butter…

I like the 99 cent store, but everytime I go there I can’t stop the memories of the great times I had there when it was a theatre.

< The Clairemont Theatre held a special place in my life as well. I grew up in Clairemont. In fact, the first movie I ever saw was at that theatre. I was four years old, and the movie was The Sound of Music, which played a whole year at that threatre. >

The Clairemont is not the San Diego theater where the year-plus engagement of “The Sound Of Music” played. That would be the Loma. Perhaps you saw it at the Clairemont during one of its re-issues.

< It was also the theatre I saw Star Wars at for the first time, first showing. I wish I knew what date that was, as I know the theatre did not show it on May 25th, opening day, but later. >

The San Diego first-run of the original “Star Wars” was at Valley Circle, where it played exclusively for 57 weeks. Perhaps you saw it at the Clairemont during one of its many re-issues.

I have many fond memories of this theater. When I first moved to San Diego in 1969, I was 7 years old and we lived about a block from it.Later, we lived over on Jutland Drive and it was a second run theater where you could see a double feature and a cartoon for the tidy sum of 49 cents. My brother and I got a dollar a week for allowance, so my mom would drop us off at Rascos dime store in the Clairemont Square where we could buy candy by the bulk. We could get ¼ lb, of candy for 50 cents. Then we walked over to the theater around noon and mom picked us up around 5. Good deal for us AND Mom!

I remember when the Clairemont Theatre was built in 1965. Completion of the theatre was eagerly awaited by throngs of bored kids who had was very little to do in 1965, apart from roaming the empty fields and canyons of Clairemont When the theatre opened in 1965 tickets cost only 35 cents each. Hundreds of kids would line up outside the theatre waiting for it to open on weekends and during the summer when school was out. The theatre manager was a scowling, overweight man with a thick German accent. He ruled the theatre with an iron fist. He would grab kids who made noise during the movie or were throwing candy at other patrons by the arm and make them sit in his office until their parents came to pick them up. I remember seeing the Longest Day, Dr. Zhivago, Night of The Grizzly, The Collector, Green Berets, Follow Me, Boys, War Wagon, Casino Royale, In Like Flynt, Grand Prix, Love Bug, Fortune Cookie, Born Free, Tammy, How to Murder Your Wife, Itâ€™s a Mad, Mad World, The Longships, The Vikings, Night of the Generals, The Warlord, Krakatoa East Of Jave and many other movies during the mid to late 1960s. The most memorable incident at the theatre occurred around 1966 when an usher fell to his death while replacing burned out light bulbs in the ceiling. The usher was walking on a catwalk in a crawl space between the false ceiling and the roof when he tripped and plunged head first through the ceiling tiles to his death on the seats below. Everyone knew the location of the seats where the usher had been killed, in the center front rows, and nobody sat in those seats for years afterward. The area of the ceiling that he fell through was also evident because the replacement ceiling tiles were lighter in color than the surrounding tiles. About 1976 or 1977 the theatre was converted into two theatres and became the Clairemont Twin Theatre. The Theatre closed and remained empty for many years before being converted into a 99 Cent store.

The $300,000 Clairemont Theatre launched in 1965 to the plans of Drew Eberson with seats for 1,200 patrons for Stanley Warner Circuit.

Did anyone attend the July 3, 1965 live appearance of the Three Stooges?

Re: the poor 19-year-old usher who fell to his death. Where did you hear that he was replacing a burnt out light bulbs in the ceiling? In an interview the day after the accident in the July 27, 1966 San Diego Union, the theater manager told a reporter that he had no idea what [William M.] Rubin was doing up there. “It’s a mystery to me. His duties wouldn’t take him up there.” Also, the article states that “Several children saw Rubin plunge through the ceiling, spraying bits of plaster over six rows of seats IN THE REAR of the theater. It also stated that few other of the 300 or so patrons saw him fall. Perhaps because it was at the rear during the program when the ceiling lights would have been off. One child reported, “I felt plaster falling on my head, I put my hands over my head and then I heard a loud noise. When I looked around, the usher was hanging over the seat.” How did the 13-year-old know it was the usher in a dark theater? Unless the manager turned on the lights after the loud noise. I’m surprised the witness wasn’t traumatized. The body’s impact reportedly bent the metal seat back.