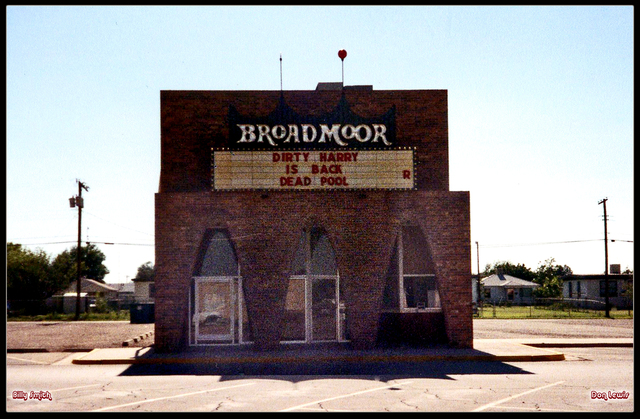 Dirty Harry is back. A 1988 photo of the Broadmoor Theater in Hobbs showing “The Dead Pool”

The Broadmoor was built by the Commonwealth circuit in 1969. Boxoffice of June 2 said the plans were “…for an intimate, de luxe, jewel-box theatre….” of about 400 seats. The target for the completion of the project was around Thanksgiving.

Another one ground to dust: This Facebook post dated August 10, 2015, has a photo of the Broadmoor Theatre being demolished. It’s still visible for now in Google’s satellite view and in street view from Sanger Street along the south end of the shopping center. A large supermarket was built in front of it, but there is aside view up the alley. The Broadmoor closed sometime after the Internet became available, as it still has pages up at several movie listing sites, though it’s listed as closed.