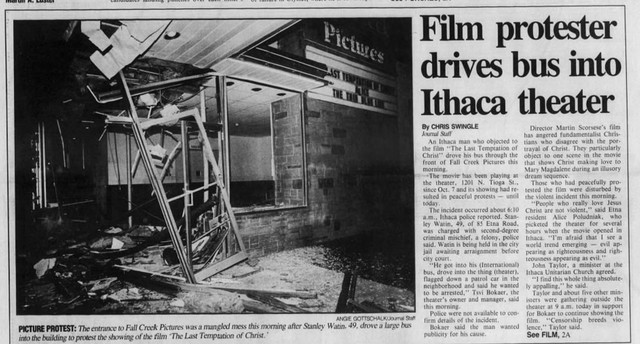 An art house movie theater opened on July 18, 1986 by Tsvi and Sarah Jane Bokaer, which was built out of a portion of the old P and C market. It is in a residential neighborhood.

Theater 1 has 160 seats, theater 2 has 93 and theater 3 has 47 seats. The theater has free parking. They had real butter on their popcorn, homemade baked goods, imported chocolates, ice cream and more.

It had closed by 2017 and a flower shop operates in the former foyer, There is also Pilates shop and the auditorium is a live music bar.

Fall Creek Pictures represents a triumph of imagination, good taste, and dedicated showmanship. It occupies the site of an abandoned supermarket building in a non-commercial neighborhood a couple of blocks away from the photogenic Ithaca Falls whose picture graces many a NYS travel brochure. As far as I know, no supermarket ever materialized in the structure that was raised for it in the 1960s (it was considered too small and outmoded for the mega-marts that were beginning to sprout up at the time). In the winter of â€˜85-â€™86, the operators of Cinemapolis on the Ithaca Commons Richard Szanyi and Lynne Cohen joined the arts and ecology entrepreneur Tsvi Bokaer in taking out a lease on the building. Within a few months they partitioned the interior into two theaters with comfortably-sized screens, deep-cushioned and well-staggered seats, and powder-blue fabric-covered walls with modern lighting.

At first Fall Creek Pictures dedicated one screen to classic revivals and move-over foreign films from his recently opened Cinemapolis on the Ithaca Commons, and the second screen to sub-runs of Hâ€™wood product from Hoytâ€™s (now Regal) Pyramid Mall megaplex. But business proved so successful that the theater soon eliminated sub-runs and began booking prestige openers from North America and around the world. Today the hallway leading from the box-office and refreshment stand (home-baked brownies, chocolate-chip cookies, herbal teas, and dark roast coffees, as at Cinemapolis) to the auditoriums is lined with posters from wonderful films shown there over the past two decades. Theyâ€™re a wonderful reminder of the great stuff weâ€™ve seen at this theater.

The Fall Creek Pictureâ€™s most distinctive touch came in 1989-90 with the addition of a third screen in a small room carved out from the side of the building. Here, in a space the size of a generous home living-room, and with about eighteen theater seats and (at first) a few upholstered easy chairs with large throw-pillows, one could see on a large wall-sized screen the very last sub-runs of the best films from Fall Creek, Cinemapolis, and even the Mall megaplex. I often wait until films played in that room, valuing it for its intimacy and sheer comfort. Itâ€™s like viewing the best of the best at home.

That small room certainly was cozy. If I had to go to the <ahem> necessary room during the show, I feared I would block the projection onto the screen.

Closed earlier this year as a new Cinemapolis opened.