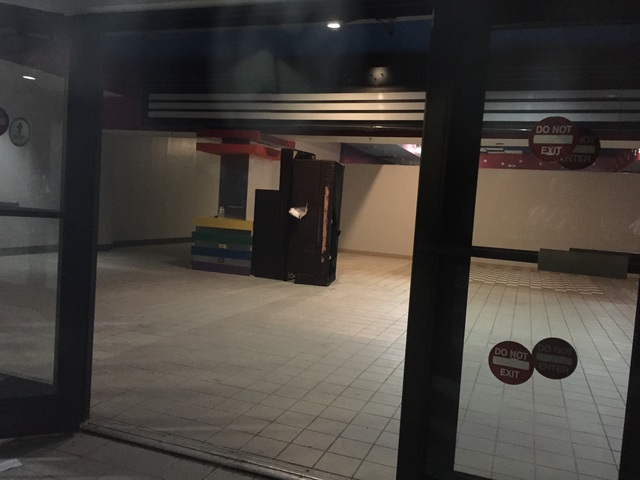 You guys, this is amazing. Even though they’ve built a whole new theater, the facade of the old Hoyts 10 is still there. I got some pictures outside and of the lobby through the doors. It’s mostly razed but you can still see some of the coloring distinct from the ‘90s. Wish you could see the wall coloring better. I wonder if the theaters are still there or if it’s just open space behind there.

The manager of the old Hoyts Pyramid Mall 10 still works there at the new Regal and he told me some interesting stories. Since old theaters 1-4 were mono, they tried to program accordingly. So movies that didn’t require immersive sound like rom-coms they’d try to play there, and keep the newer spectacle movies in the new houses.

I recall seeing some big sound movies in 1-4 during my time there, like Casino and Starship Troopers, but I think for the most part they stuck to this.

When Episode I opened, they actually had one print threaded through all 10 projectors. That was always possible with film prints, though usually never more than 2-3 at a time. And I think it was just for the first midnight show (they had multiple prints for alternating showtimes), but once it started he forbade anyone from the projection booth because if one went down, they all would!

Added daytime exteriors of the facade and more of razed interior.

Is the mall pyramid shaped?

I suppose it was a triangle with two sides that converged at the food court. Not sure the shape now that they’ve expanded. But they don’t call it Pyramid Mall anymore so I guess they updated the name with the new shape. :)

It was called “Pyramid” Mall because it was originally built by the Pyramid Corporation, a large developer of shopping centers. There were at one time many different malls that carried the name Pyramid in the northeast. They built and own DestiNY Mall in Syracuse.

What is the mall called now?

The Shops at Ithaca Mall