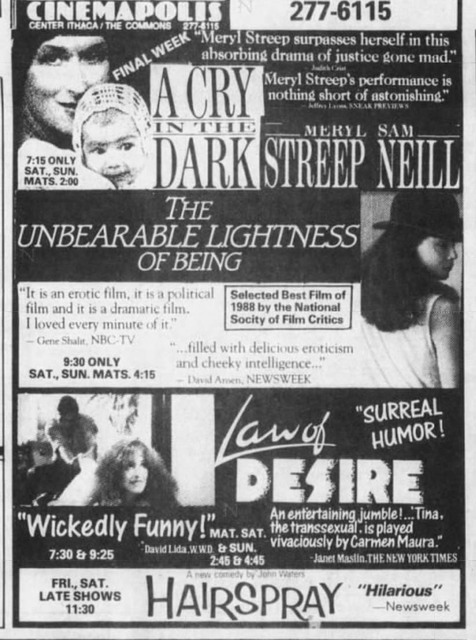 Cinemapolis was opened around the same time as its counterpart, Fall Creek Pictures, on September 5, 1986. Theater 1 has 177 seats and theater 2 has 116 seats.

It is located in the Center Ithaca Building in the downtown Ithaca Commons. It was closed in 2009.

Cinemapolis is one-of-a-kind in Ithaca, and thatâ€™s saying something in a town where thereâ€™s many ones-of-a-kind. When the block-size Center Ithaca complex opened in the early â€˜80s on State Street at Ithaca Commons, it accommodated various street-level stores, a food court, some second-level office space, and two floors of luxury apartments. But its vast basement space went unused (except for utility areas) until Richard Szanyi and Lynne Cohen got the idea of nesting a small art theater into a corner of it.

The theater, owned and operated by Szanyi and Cohen and devoted chiefly to foreign imports and North American independents, proved an immediate hit, though newcomers usually need to spend time figuring out how to find it. Its main access is on a side alley through a metal fire-exit door marked only by a toy-sized marquee and mini-display case. Itâ€™s more or less like entering an exclusive club. After descending narrow stairs, you proceed through a long cinder-block-walled basement hallway where, if you walk too fast, youâ€™ll overshoot the theaterâ€™s single doorway. Its major marker is a cluster of stills from LumiÃ¨reâ€™s â€œVoltige,â€ MÃ©liÃ¨sâ€™s â€œTrip to the Moon,â€ and the like. If you arrive before this door opens, youâ€™d never know thereâ€™s a theater inside. But once youâ€™ve been there, youâ€™ll never forget it, and youâ€™ll keep coming back again and again.

Cinemapolis proved so critically successful that a year or so later, adjoining space was carved into a second, smaller theater. In both, comfortably proportioned screens occupy a single-level space with nicely staggered, deeply cushioned seats (new sets were installed recently). The projection in each is focus-perfect, with proper masking (well, usually, anyway), and excellent sound. An ever-obliging staff goes out of its way to please, and responds promptly to requests for focus or volume adjustment. And a youthful collegiate crowd greets the performances with respectful attention, savvy good humor, andâ€"when appropriate—enthusiastic cheers.

Ex-pat New Yorkers wax nostalgic about the ambiance as it recalls NYC art houses of the â€˜50s and â€˜60s. For me, itâ€™s a mutant version of the Thalia, the Regency, the 55th Street Playhouse, and the Art, with a touch of the Baronet, the Fine Arts, and the Plaza thrown into the mix. In its main auditorium, rear-lit stained-glass panels decorate attractively draped walls, and expansive rows of seats give the impression of creating a much larger space than it actually is. In the smaller auditorium, a center aisle lends an intimacy to the side-row seating. Oh, and the refreshment stand offers home-baked brownies and chocolate-chip cookies with herbal teas and dark-roast coffees, along with old movie posters and stills from earlier attractions. The lobby can get packed between screenings, and the buzz in the air when a film lets out is terrifically energizing as patrons trade wise-cracks, critical comments, and neighborly glances. Now at the beginning of its third decade, itâ€™s a gift to the community.

Closed earlier this year when the new Cinemapolis opened at 120 E Green St.

This opened on September 5th, 1986. Grand opening ad in the photo section. It closed down in 2009 for the new Cinematropolis on E. Green.

The Cinemapolis has been re-opened and re-modeled with additional screens.

This theatre has not been reopened. The currently operating version of Cinemapolis was a new build theatre located on the ground floor of the Green Street Garage (located directly behind the building housing this theatre).

Unless this thread is intended to stay exclusively about the old place, the theatre address is now 120 East Green St., and it is now five screens.