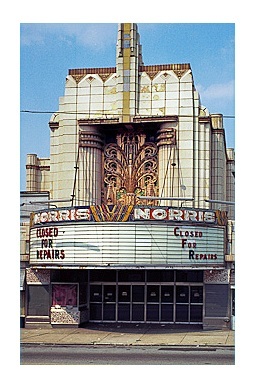 The Norris Theatre opened on December 22, 1930 in Norristown, the county seat of Montgomery County, a suburb of Philadelphia. The first feature film was the romantic comedy “Fast and Loose” starring Miriam Hopkins and Carole Lombard. Opening prices were 20 to 35 cents for matinees, and 25 to 50 cents for evenings. The theatre was designed by Philadelphia architect William H. Lee. Nearby, in what are the Main Line suburbs, other theatres that were designed by Lee and continue to show movies include the Anthony Wayne, Bryn Mawr, and Narberth. The Norris Theatre was opened by the Sablosky brothers, Norris Amusement Company, who were instrumental in the formation of the Stanley Company of America in Philadelphia. The Sablosky’s operated a chain of movie theatres in Norristown, with the Norris being the flagship.

The Norris Theatre was an Art Deco fantasy. The 1950 square foot foyer was decorated with two murals, 50 feet long and 8 feet high, a fountain filled with fish, and six 8x4 foot stained glass windows. Jesters, skyscrapers, musicians and dancers were depicted in these stained glass windows. There were oval mirrors. The auditorium had a sky blue ceiling with twinkling lights that resembled the night sky and a pipe organ.

When the theatre opened, Norristown was one of the largest towns of the Philadelphia suburbs, with many retail stores and entertainment. With the introduction of television and construction of nearby shopping malls and movie theatres at King of Prussia and Plymouth Meeting, neither the town’s retail shops, nor the theatre were doing well. By 1965, the Sablosky’s leased the Norris to another company. Philadelphia theatre operator Budco operated the Norris in the 1960’s. The balcony was closed then. A four year effort to play bargain priced movies and rock and classical concerts was not successful. The last movie was shown in April, 1982. In 1978, Norristown had hired planning director Richard Schmoyer who wanted to preserve the theatre. It did not happen, despite the interest of a developer who wanted to invest in Norristown and who viewed the preservation of the Norris as a pivotal to the future of Norristown.

The Sablosky’s sold the Norris and the theatre was demolished in March 1983 for the construction of a McDonalds. A last minute request by borough officials that the theatre’s facade be saved for incorporation into the McDonalds was declined. The fast food restaurant itself has since been torn down and turned into a parking lot. Norristown has lost all its historic theatres and the opportunity for revitalization that reopened theatres have brought to other county seats of suburban Philadelphia. In the seat of Delaware County, the Media Theatre was restored for live shows. In the seat of Bucks County, the County Theatre in Doylestown was saved and shows arthouse movies. Other towns in Montgomery County, such as Ambler, Bryn Mawr, and Narberth benefit from the 1920’s movie theatres that have survived to show movies.

The 20 foot tall Art Deco window grille, glazed and gilded Terra Cotta was salvaged from the facade of the Norris Theatre. The grille was dismantled and brought to Miami in 110 boxes. The grille was reassembled, and is on display, as an icon of 1930’s Art Deco design, as the centerpiece of the lobby of the Wolfsonian Museum in Miami Beach, Florida. The museum’s conference room is decorated with Art Deco stained glass panels from the theatre’s foyer. The Wolfsonian is in Miami’s famed Art Deco district.

The above commentary is the same argument I’m making right now for another of William Harold Lee’s theatrical creations, the Pennypack Theatre (originally called the Holme) here in the Holmesburg section of Philadelphia, PA’s Northeast. The Pennypack Theatre, built in 1929 in the Art Deco style and with the capacity to seat over 1,300, is in an excellent location to be restored as a movie theater, as it’s both alongside a major thoroughfare plus has no other movie theaters around in close proximity. Add to this that it has its own sizeable parking lot, easily sufficient to make it workable as a theater once more.

Trouble is, its current owners are insisting on converting the historic theater building to be a type of mini mall instead, which, when completed, will have a Dollar Tree Store, Pizza Hut, “upscale” coffee shop. laundromat plus some light retail. In brief, all things that Holmesburg has plenty of already. As for the consumer business stretch where the historic theater building stands, it is hurting like hell and has been ever since the Pennypack Theater stopped being a theater back in the late 1950s.

In terms of its over all size, the theater building is huge, and back in the ‘50s when it stopped serving as a theater it could easily have been upgraded so as to stay competitive, but for reasons unknown it never was. In terms of structure, it sits on high ground not prone to flooding, and its exterior walls appear to be as solid as the day it was built. At the back end it has an enormous stage house, suggesting it was also designed for live performances. Just a stone’s throw from the theater a popular upscale Italian restaurant is currently in the process of expanding. But this restaurant might be overshooting if it’s to be nearby to what the current owners have planned for that theater building. So I basically feel as I’m observing this that Norristown’s stupid mistake is being repeated all over again when it shouldn’t have to be. But with Northeast Philadelphia being the way it is right now, politically and otherwise, what more can I tell you? For I keep pointing out to people that the theater is in an easy to get to proximity from several upscale communities. But those who appear quite determined to convert Holmesburg to pure ghetto are choosing to totally ignore this fact.

Anyway. that’s the basic rundown regarding the Pennypack Theatre for now. And my prediction is that if the current plans for that historic theater building do go through it will be just another stupid Norristown repeat. Alas! Se la vie!!!

A Florida musuem, the Wolfsonian, shows off the wonderful Art Deco exterior window grille from the Norris!
http://www.wolfsonian.org/collections/index.html
search under Historic Buildings.

There was also an article in the Philadelphia Inquirer a few months ago about the Norris.

RG is right, that this was a terrible missed opportunity. The Inquirer reported that they sensed that at the time, but somehow the theater was lost anyway. There are other examples, too, of theaters helping towns, including the Media theater in Media, the seat of Delaware County. The Media Theater doesn’t host movies, but live theater, and has helped to bring restaurants and life to the main
street there. And, unfortunately, there are NO theaters left in Norristown.

All I can say is this was a great theatre. I managed this house in the 60’s to SOLD OUT, Standing Room Only crowds. It was just great. rg

My Grandfather and his brothers built the Norris. Their company was Norris amusments AKA Sablosky Brothers theaters. I actually have a brand new never used ushers flashlight from that theater. Does anyone know where i can find more pictures of it?

I show an address of 133 W Main Street for this theatre. 63 E Main was the Grand.

raymondgordonsears: My grandfather was EVP of Budco. His name was Pat Beck. Based on some of the comments of your’s that I have read, it sounds like you may have potentially had some contact with him. I would appreciate it if you sent me an email to discuss. I never met him, but would like to learn some more about the man I am named after! Thanks!

Visited the Wolfsonian-FIU Museum at 1001 Washington Avenue, Miami Beach, FL 33139 once again last year. This time I finally read the caption for the interesting golden structure at the back of the museum lobby…. then had to look on Cinema Treasures and found this page for the Norris.

Look at the grille above the marquee in the historic photo above, then click on this:

Window panels from the lounge.

More window panels from the lounge.

I wonder how these items from Pennsylvania ended up in Miami.

Had my 10th birthday “theater” party here in 1958. Matinee with 8 other young ladies. I still see the art deco lounge in my dreams. It’s where I fell in love with Art Deco styling.