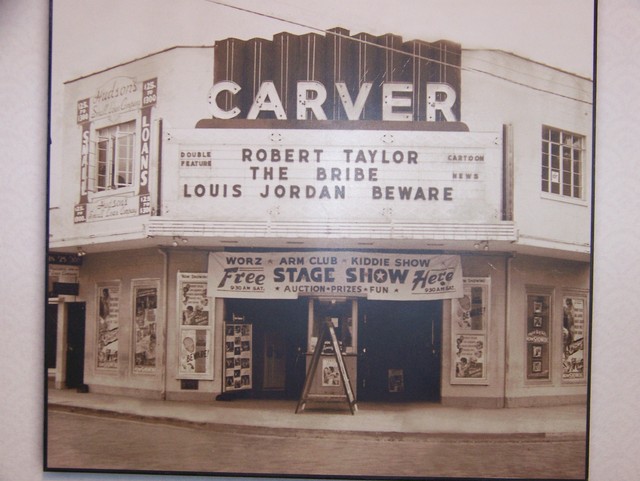 The Carver Theatre was the last one built in the African-American community in Orlando. Opening October 28, 1949 with John Wayne in “Red River”, the theatre featured a large elaborate marquee that was well lighted, with many lines for letters. The stage featured screen curtains. As the city began its integration process, business fell off to the point that it simply had to close during the early-1960’s. The building stood until early-2005, when it was demolished.

The Carver was opened in late 1949, according to various items in Boxoffice Magazine that year. The November 19 issue mistakenly stated the location as Ocala, Florida, but a correction was printed in the following issue. The Carver was built by a local celery grower named Charles T. Niblack, and was operated for him by Harry Gordon, formerly of Florida State Theatres.

Like many other southern theaters built for black patrons during the era of segregation, this house was named for African American scientist and inventor George Washington Carver.

The Carver Theater also featured live minstrel shows – like “Silas Green from New Orleans” – from time to time. Children admission was only 9 cents in the 50’s and the concession stand included an outdoor walk-up window which opened before the theater doors actually opened. That meant I spent all my money on greasy french fries I was warned not to eat and had no money left over to see the show. So I would cry cry cry until some angel of mercy passing by gave me show fare. Over the years the Gordons always let me use the office phone to call my mother to pick me up after the second-run double feature. The village was caring, protective, and safe before integration destroyed Orlando’s black community.

Mr. Jennings, I am a student with the UF School of Architecture and I am currently doing a revitalization project in the community of Parramore. I am interested in getting some more information (content and photos) about the Carver Theater. Could you advise of a good resource?

Monday night was movie night for Jones High School students circa 1960-62. The NAACP Youth Council tried to persuade the Gordons to clean up the Carver Theater and show first run movies so we would not have to wait a year to see new releases. The Gordons tuned us out and flatly turned us down, so we decided to boycott the Carver (one of only three motion picture theaters in Orlando open to colored people at the time). Soon teen activists were marching around the block with picket signs and chanting “We Shall Overcome". When we flipped the homemade posters on their sides to block access to the ticket booth, don’t you just know Negroes ducked under the signs and ran inside laughing!

Beverly Albert North LOLs when she recalls, “White people driving by threw money at us in support. One lady even threw a $20 bill on the sidewalk. Chiiild, one of us snatched it up before it blew away.” ($20 then was equivalent to $200 today!)

Since we were not making much progress, senior students asked our favorite teacher for help. Sam Smith literally went to the Orange County School Board with hat in hand to beg for instruments and supplies to equip the run-down outdated chemistry lab at Jones High School. Mr. Smith taught Chemistry and showed us how to make stink bombs. We then recruited top student and classmate Allie Parrish, who was smart, daring, and damn near white and innocent looking enough to set off the bombs in the crowded theater without arousing suspicion.

Picket line crossers ran out of the Carver cursing and screaming – like a scene right of the “The Blob" playing inside – completely disregarding the WALK DON’T RUN warning. Picketers cracked up and laughed so hard that tears formed in our eyes. Some of us were later arrested for illegal picketing.

Nathan: Geraldine Thompson, curator of Museum of African American History and Culture, might be able to help you. Good luck in your research.

This opened on October 28th, 1949. Grand opening ad in the photo section.

Thank you for ad. How can I copy it?