Save the Lorenzo (Official) 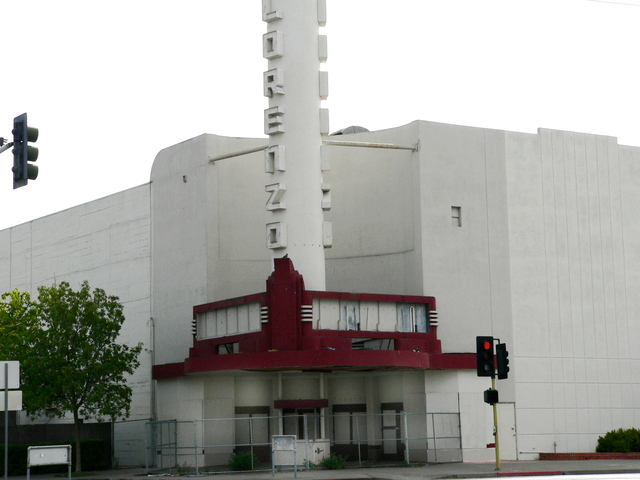 On April 5, 1947, the United Artists built Lorenzo Theatre opened in San Lorenzo, California. Not only were the opening night attendees treated to showings of “Swell Guy” starring Sonny Tufts & “The Dark Mirror” starring Olivia de Havilland, but they also were among the first the see interior designer Anthony Heinsbergen’s glorious fluorescent murals. These enormous jungle scenes are the first black light murals in Northern California history.

In addition to the works of Heinsbergen, who received his first major theatre commission from Alexander Pantages in 1924 and decorated over 750 theatres nationwide, the theatre was designed by San Francisco architects Alexander A. Cantin, who was known for unique marquees and A. Mackenzie Cantin. Seating was provided on a stadium plan, with a raised stepped section at the rear, rather than the conventional overhanging balcony.

Throughout the years, many special events were held at this amazing treasure. Throughout its functioning years, the theatre hosted Saturday morning “kiddie matinees”. Costume parties were held for the community on Halloween. Live amateur performances regularly graced the theatre’s stage. Additionally, the Lorenzo Theatre was the first theatre in northern California to house a live cast of “The Rocky Horror Picture Show”.

The Lorenzo Theatre fell victim to the same disease of its peers, the advent of the multiplex theatre, and closed its doors in 1982. It has remained vacant since.

In early-1999, the Lorenzo Theatre Foundation was formed. The California 501c non-profit organization is dedicated to the salvation and restoration of the Streamline Moderne style treasure.

ART DECO PRESERVATION AWARD from the ART DECO SOCIETY OF CALIFORNIA IN May, 1986 ten of these are given each year to buildings deemed worthy of preservation.

The Lorenzo Theatre was designated a California Historic Resource early in 2001.

On September 12, 2002, the Lorenzo Theatre was named a Historic Preservation (HP) District by the Alameda County Board of Supervisors, the first in Alameda County.

Funny thing seat slashing must be a California thing. Worked in five theatres 2 single screens, 1 twin,1 triple and one Quad,and that is a lot of seats .but you know in the seven or eight years i worked in a theatre I can’t remember anyone ever slashing a seat.Sad comment a theatre owner had policy no kids under 16 without parents,bet he lost a ton of money.I bet the real truth was he didn’t want a bunch of kids running crazy in this theatre!

Anything happening at the Lorenzo?

Having heard Jack Tillmany’s stories of the Lorenzo under his tenure from the source, it is clear that Jack actually made a lot more money than he supposedly lost by not admitting kids under 16 without a parent. At the time he took the operation of the place over from UATC, it was a haven for wild teens and younger kids. Adults, by and large, had ceased going there. It had become, essentially, a babysitting facility. The doors had been removed from the bathroom stalls to keep kids from smoking in them. Once Jack started his policy, he put the doors back on the stalls, gave the place a thorough cleaning, and, since he had good dealings with distributors, got films with huge appeal—revivals, and titles that were more recent, but were favorites with proven track records. He would advertise as having Exclusive Bay Area Showings, and, indeed—it being the era before video, he did a fantastic business. People literally came from all over the Bay Area to the Lorenzo, because they knew they would experience good presentation in a clean, comfortable, and well-behaved atmosphere. NOTE: The photo of the vertical sign tower and marquee I posted is scanned from a slide I took in Summer, 1984, when the theatre sat closed.

Hi Diane, I’m Chris, and I and Lily started the cast RKO at the Lorenzo in November 1979.

We were the second cast in Nor Cal that I know of, not the first. Double Feature at the Strand in SF had started in, I think, 78. One of my friends played Riff in that cast and I joined as a Transylvania the summer of 79, just for the summer.

The first time Rocky showed at the Lorenzo was the weekend after Halloween in 1979. I approached Dan, the manager, and he (with great hesitation) agreed to let us form a group there. By the following June we were a cast of 6: me, Lily, Jerri, Kevin, Joey, and Terri. Later in the summer our cast got much larger.

I’ve seen this article quoted multiple places; could you perhaps correct that claim?

The fire was declared out around 9pm, 3 ½ hours after the first alarm was called in, a crew stayed overnight to watch for any hotspots that flared up. I went by yesterday morning and took a few pictures, a couple of which are now on the photo page. Damage was severe, an article from one of the area newspapers can be read here.

While the two pictures I posted are of the exterior, the Alameda County Fire Department posted four pictures of the damaged auditorium on their twitter account, which can be viewed here.

You never know about classic theatres that burn. They may have some fire insurance money to at least save the front Lorenzo neon tower sign plus the box office & marquee. The inside black light cement walls could be saved and cleaned up. A brand new 6 plex movie theatre with state help feed money along with a new movie/entertainment operator may be interested in taking over the project and building inside the former Lorenzo walls? Time for Live Nation or the guys that run the Fox Oakland to get involved to bring music/movies and live events to to Lorenzo Theatre.

The theatre is burning again today. Stabilization work has been ongoing since the June 5 fire as new operators (Matt Delima and Kris Dorrance) had been engaged prior to that date. No word released on the case of that fire, and nothing yet known about today’s, but I hope this will not be the end of the story.

Video on the 5pm news show the fire at the back of the auditorium, so hopefully further damage to the murals will be minimal.